We are cycling the entire route of the new La Vélo Francette – here's our overview of the route from Angers to Mayenne. 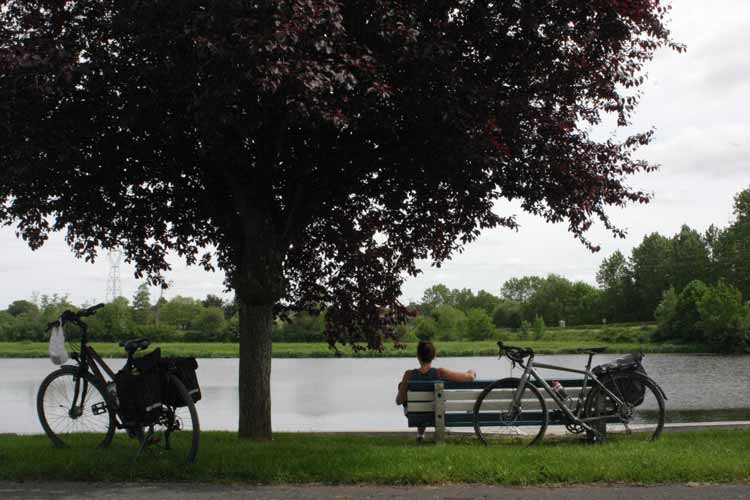 I'm going to cover this section a little differently to previous blogs about individual days on La Velo Francette. That's because this stretch of the route along the Mayenne river is essentially the same. In a gloriously, stupendously fantastic kind of way.

Make no mistake: the Mayenne River section of La Velo Francette is not to be missed. It follows the river the entire way. I don't think we rode on a road anywhere, except to explore towns such as Laval, and to our B&B in Chateau-Gontier. Even our detour to Decathlon was on a dedicated bike track.

We'd stayed at Hotel de l’Europe in Angers, which had 'acceuil velo' status, a locked courtyard for bikes and a big hearty breakfast. 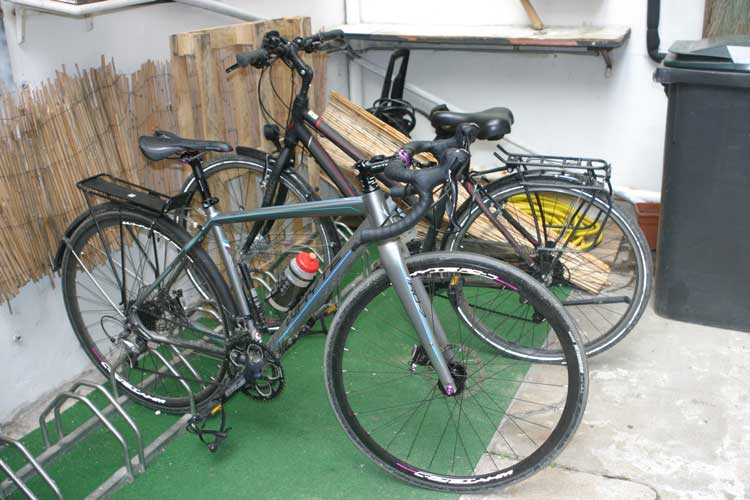 The section of the La Velo Francette north out of Angers follows the Sarthe river and passes through nature reserves and bush trails. I haven't included our GPS of the day as part of the trail was flooded (unusual in May and unlikely to happen during peak cycing months; check at tourist offices if in doubt). Here's the official map instead of that section: 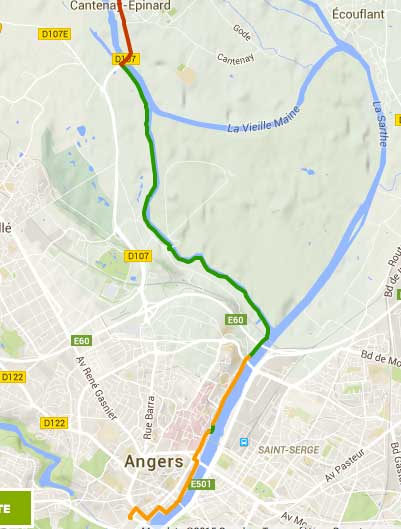 Full map of this section is here on the official site. 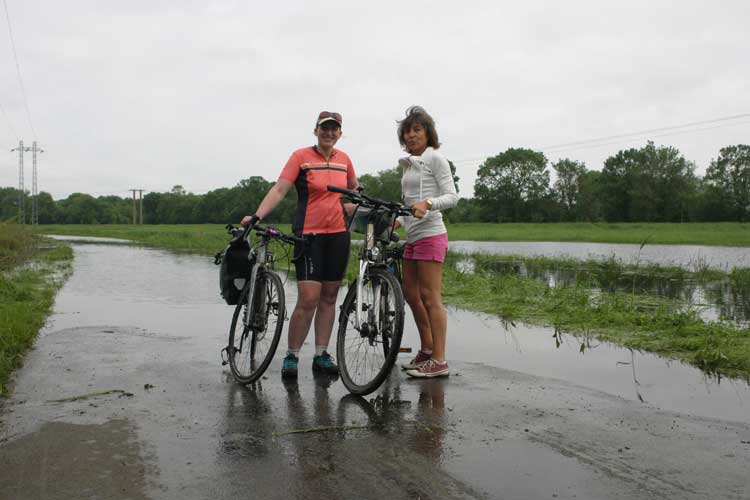 As a result, we took a detour. We were riding with Nathalie from the local tourist office (that's us above), who I think it's fair to say is something of an Anjou region cycling guru: there isn't a road, trail or bike path she has not ridden. We were in safe hands.

This section of the route (and the rest of it along the Mayenne) was not yet marked for La Velo Francette when we rode it (early May 2015) but it should be complete by the end of June. Maps etc are available locally at tourist offices. 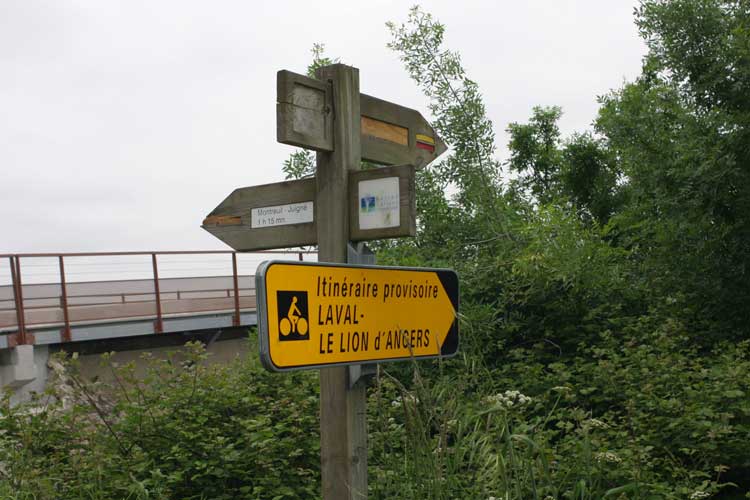 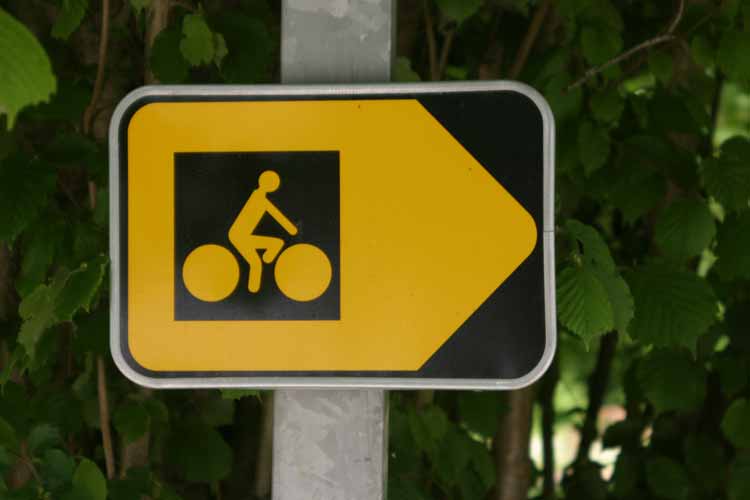 We saw work under way on the route south of Cantenay-Épinard, which was exciting: 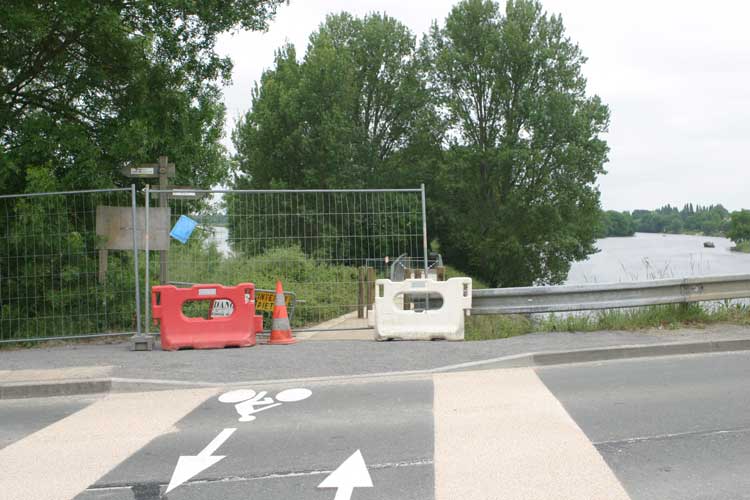 Other facilities, such as this cyclists' rest area at Cantenay-Épinard (toilets, info centre, parking, picnic area etc), were al 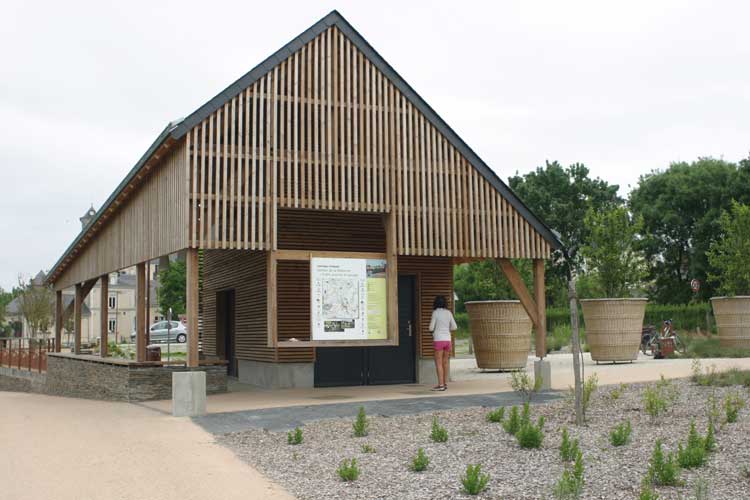 The road from Cantenay-Épinard to Grez-Neuville, where we had lunch, is currently a temporary route but it is safe and almost traffic-free.

We had to endure this view from the creperie at Grez-Neuville over lunch. 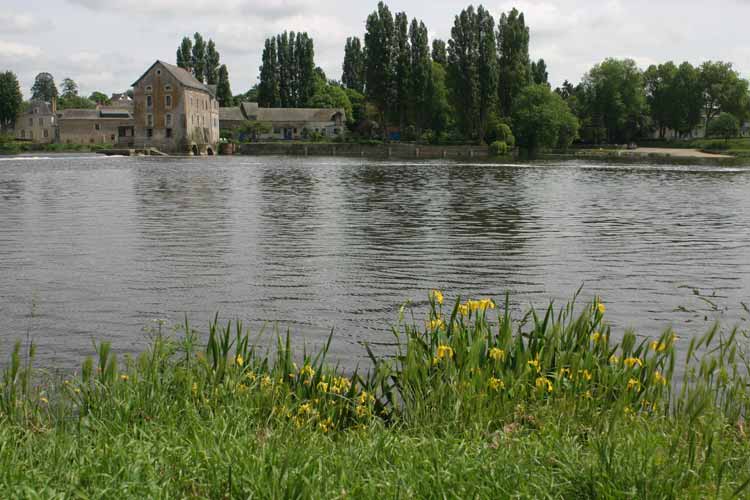 From Grez-Neuville the route is a dedicated river trail that's near perfect for the most part. There are rougher sections or some bits that have been under repair and had temporary shale rock or patching, but, seriously, you could not ask for a better, more beautiful or safer route for cyclists (especially kids).

You will see this (the official voie verte or 'greenway' sign): 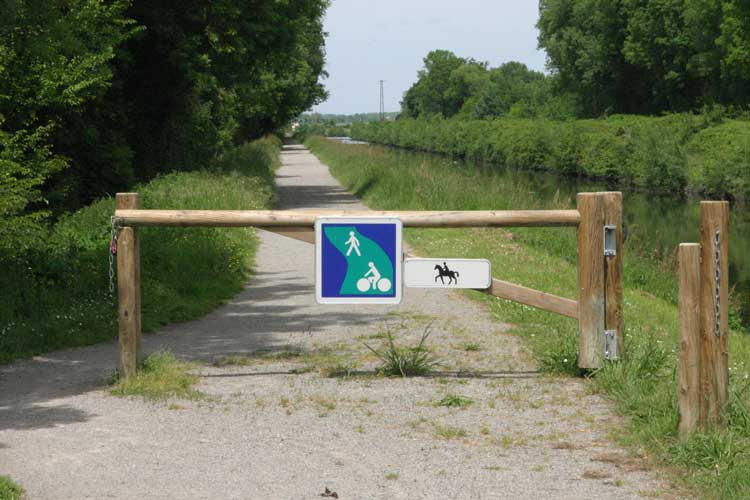 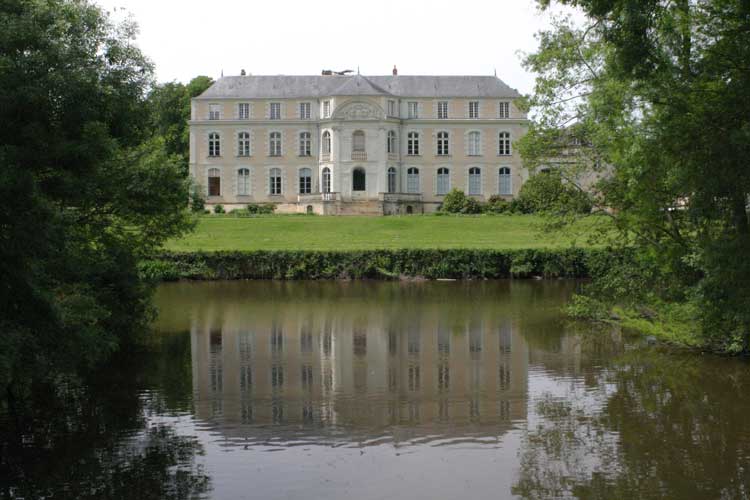 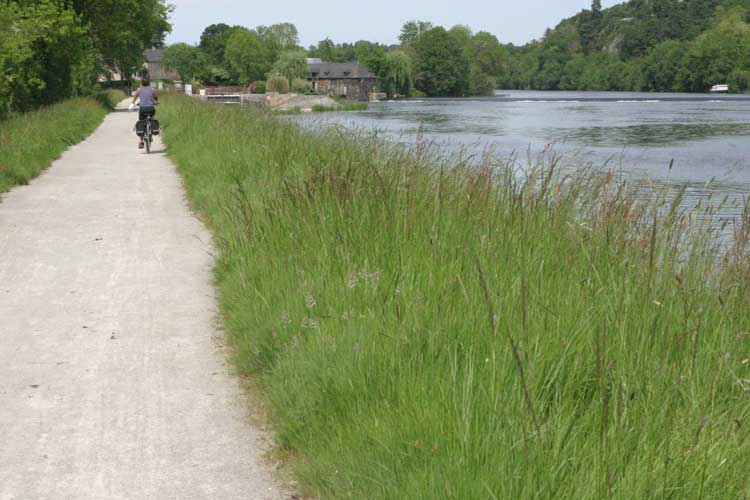 And signs like this that make it impossible to get lost: 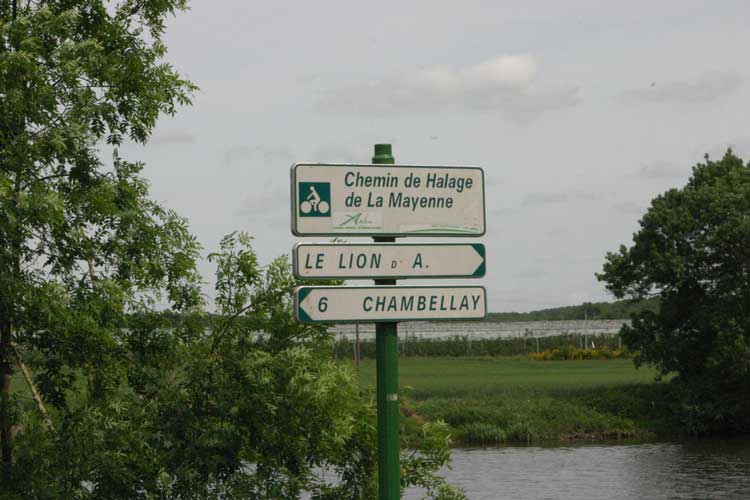 The only exception to my 'can't-get-lost' statement above was the signpost into Chateau-Gontier – if you are coming form the south, then ignore the first sign to the town and keep riding until you actually see the town on the riverbanks. Make your way into the town centre from there. The current signpost (May 2015) leads you in a roundabout way. Basically don't turn off until you see the town centre.

In Chateau-Gontier we stayed at the lovely Parc Hotel with its quaint bike parking courtyard, its own fleet of hire bikes and lovely relaxing gardens. 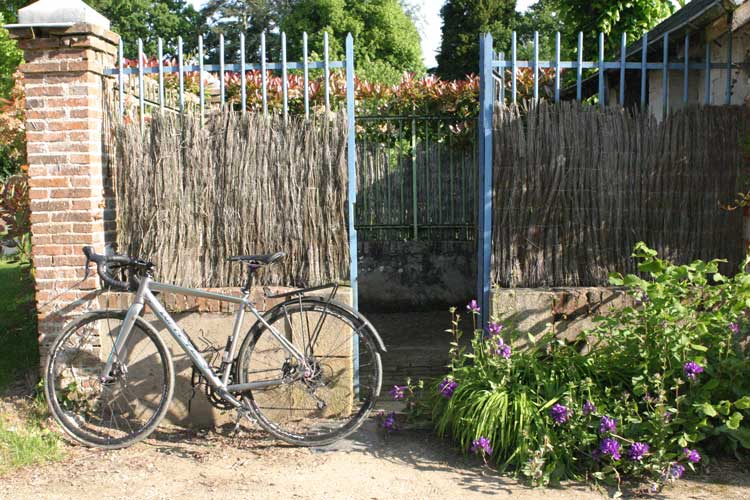 From Chateau-Gontier it was more of the same – beautiful river broken only by regular locks to control the water's flow. 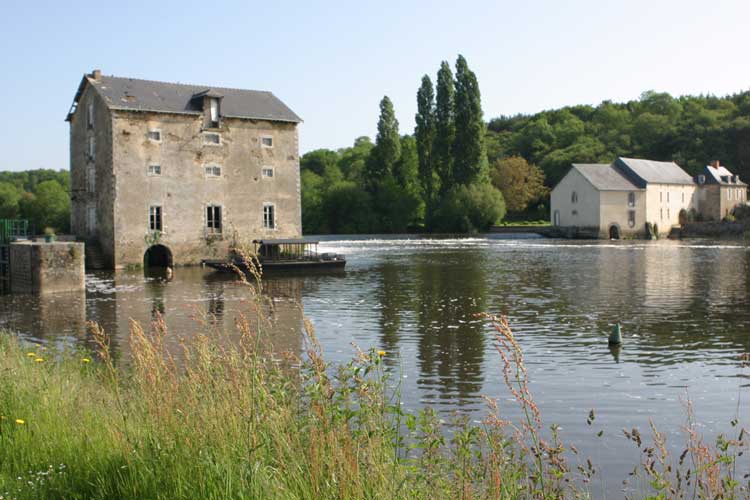 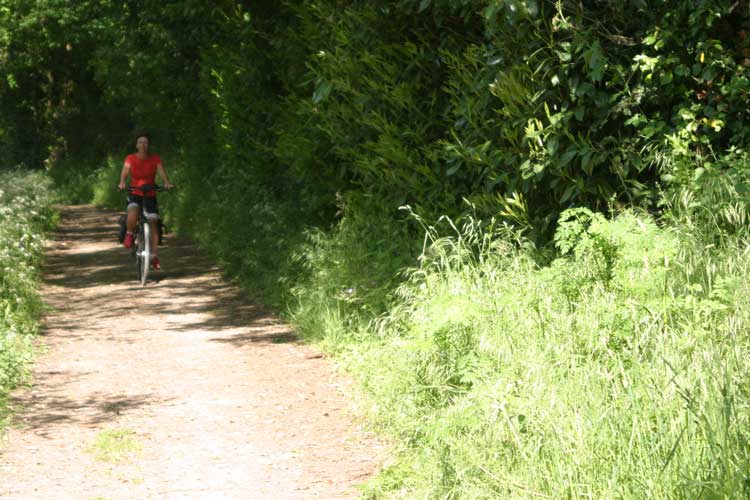 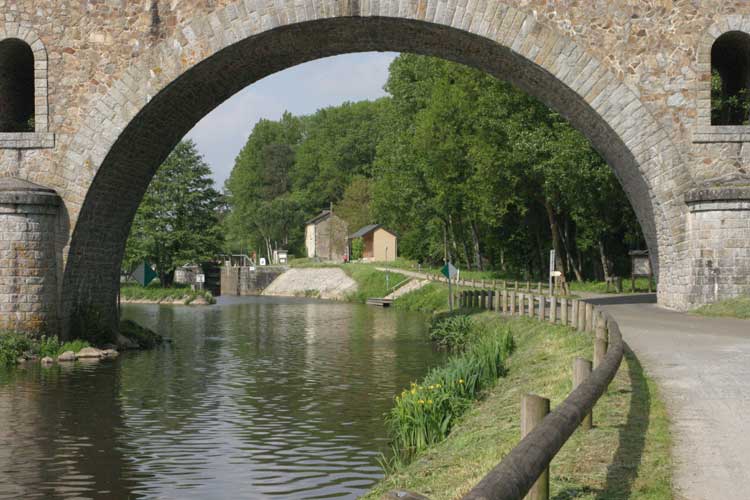 We stopped in Laval for lunch on the second day – lovely town with lots of eating options. 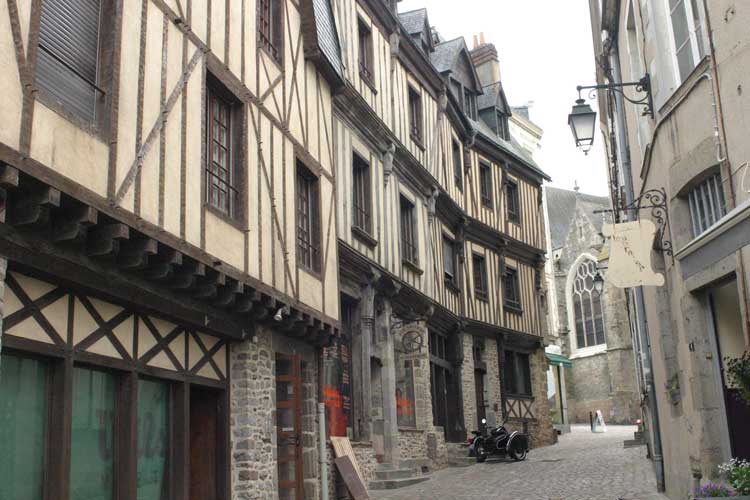 And made a quick detour to the town's Decathlon store (easily accessible form the river path if you get stuck for spares. Email me if you need directions). With rain on the way, we reinfored our wet weather kit (though Nicky also left with a new bikini and swimming goggles).

From there it was on to Hotel La Marjolaine, just short of Mayenne and directly accessible from the river path.

It was vin rouge time!