Two new high-speed railway lines open in July, linking Paris to Bordeaux, and Paris to Rennes. Here's what you need to know about them.

Click here for more on bikes and trains in France

Here's what you need to know.

Where does the TGV Océane go? 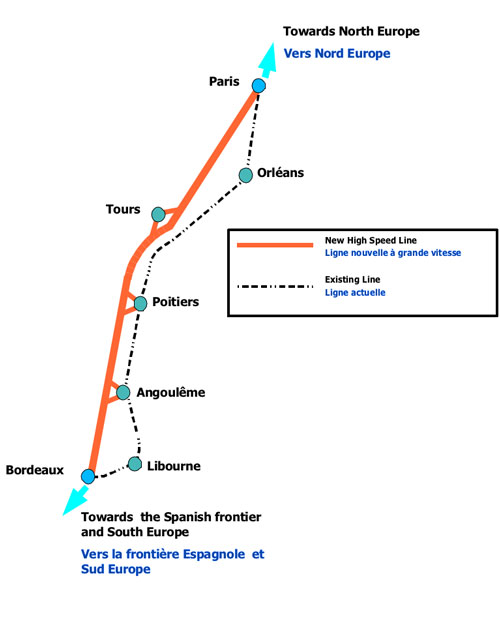 TGV Océane is the new high-speed railway line between Paris and Bordeaux, linking the two cities in just 2 hours and 4 minutes (cutting journey times by up to 1 hour and 15 minutes). There will be more than 33 return journeys a day over the 581km railway line.

Trains will also either stop at Poitiers and Angoûleme, and link to services for La Rochelle. From Bordeaux trains go on to Toulouse but only use the new high speed line as far as Bordeaux (you don't change trains, though – the train changes lines but you won't even notice). Lots of routes in France use a combination of high speed and classic lines and the transition is seamless.

Where does the TGV Armorique go?

TGV Armorique links Paris to Rennes in 1 hour 25 minutes, a saving of 40 minutes on the current journey times. There will be more than 29 return journeys a day.

When do the new trains start running?

When can I buy tickets?

Tickets are on sale for both now. Bikes need to be booked in when you buy your ticket. You can book via the French OUI.sncf site or it's easy to do in English on Trainline (info here).

NO. These trains did take fully assembled bikes until January 2020 - this is no longer the case. See here for workarounds on how to get to the west coast on local trains with your bike. If you bike is boxed or bagged then you should be fine.

Both lines use new TGV trains that travel at speeds of up to 320km/hr. New on board features include increased leg room, seating that can swivel to face the direction of travel, on board wifi. There are also larger tables with plug sockets and USB ports, and moveable personal lights.

Each train seats 556 passengers (158 in first class and 398 in second class). There are two power cars per train, five second-class cars, two first-class cars and a bar car.

How to book a bike on French trains