The Véloroute du Lin follows the traditional flax trail across Normandy. It runs from Hautot-sur-Mer, near Dieppe, to Fécamp.

As the name suggests, the Véloroute du Lin gives pride of place to one of the highlights of this part of Normandy: flax. With long sections of green way, four car parks and 12 picnic sites and rest spots along the route, it is a family friendly alternative to the more hilly, challenging Véloroute du Littoral, which runs along the Alabaster Coast from Dieppe to Fécamp.

The Véloroute du Lin is a fantastic one-day cycle or overnight ride for cyclists of all abilities.

The Véloroute du Lin is by no means a surprise to locals in the surrounding area, as it follows an old railway line that used to run between Dieppe and Fécamp, and which has long been used as a walking route.

Cyclists will find the 75km of cycling pleasantly flat and punctuated with picturesque former railway stations, all with their old signs still in one piece. They will also see a variety of landscapes: the vibrant blue flax fields (which flower in June) of the Pays de Caux, the Scie and Saâne river valleys, as well as a multitude of quaint villages en route, where you can stop off for lunch and explore. 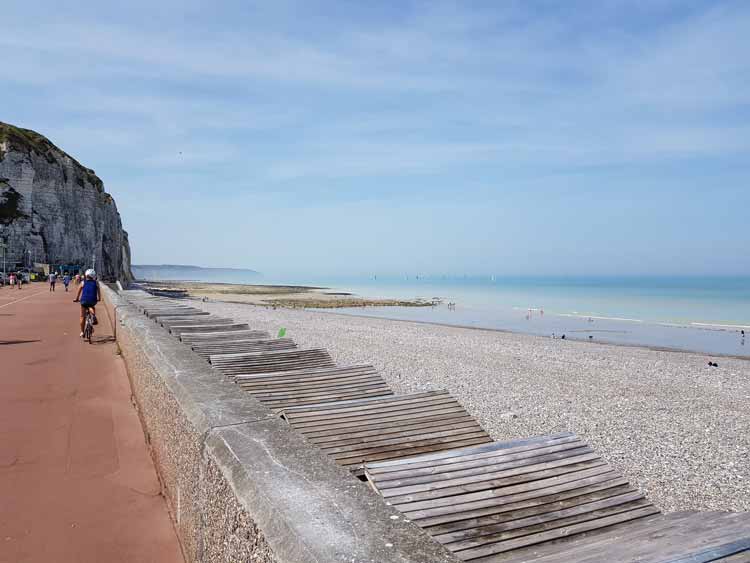 Our journey began in Hautot-sur-Mer, a small town on the outskirts of Dieppe, which is also Ben’s home town.

Here, there are not flax fields, but a beach with a painful past. Ben tells me that this section of coastline was named Green Beach following the Dieppe Raid (Operation Jubilee) in 1942. Tragically, the operation was a failure, but it did allow the Allies to obtain valuable information ahead of the 1944 D-Day Landings. The local people wanted to remember the many Canadians who died trying to liberate this area from German occupation, so these young men’s sacrifice is commemorated on the monument next to the chapel.

Leaving behind the elegant beach huts on the seafront, Ben and I rode onto the Scie Valley. After a gentle climb, we arrived in Offranville, whose USP has to be its church with its quirky twisted spire. There is also the very pretty William Farcy floral park which extends over seven acres and boasts eight themed gardens and a museum. Both the floral park and a shop called Planet'vélo in Offranville rent bicycles, so this is also a possible place to start your ride. 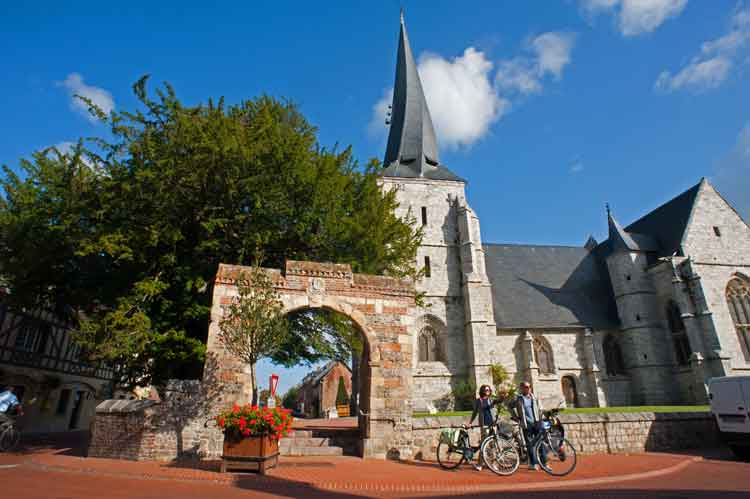 Posing outside the church in Offranville. Photo: Daniel Decamps/Normandy Tourism

Into the flax fields

Heading out of Offranville, Ben and I encountered our first flax fields.

Flax is cultivated around the world for its fine, strong fibres and its seeds, which are rich in nutrients. In bloom in June, the flax in Seine-Maritime (where we are) is of a very high quality, and is ‘torn’ over the summer then arranged in windrows in the fields for several weeks to dry out. It then undergoes threshing, which separates the flax seeds from the fibres. In case you were wondering what the flax seeds are used for, they go to local restaurants for use in cooking). 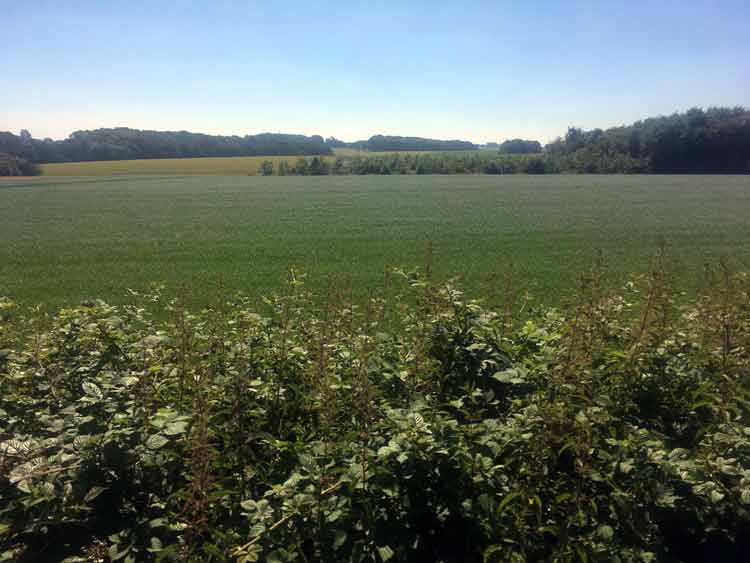 We continued on to Saint-Pierre-le-Viger, a town described as being ‘between sea and linen’ due to its proximity to the Alabaster Coast and the flax fields for which this part of Normandy is renowned.

Here, the Terre de Lin, a 79-year-old linen cooperative, works all of the fibres grown in the surrounding fields. This arduous process of retting (moistening), dressing (drying then scraping down) and spinning the flax fibres make it possible to produce the yarn needed to make textiles and other blended materials. Visits can be arranged through the Bourg Dun tourism office on + 33 (0)2 35 84 19 55. 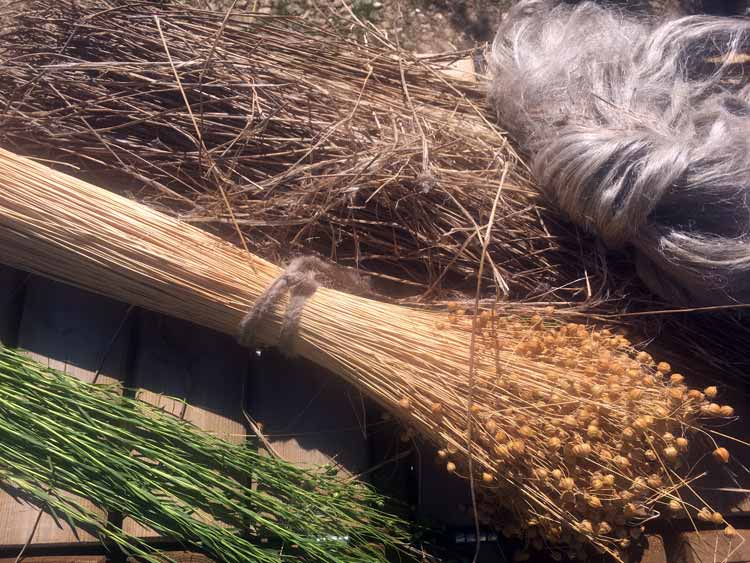 Saint-Pierre-le-Viger makes for a great lunch stop if you are doing the whole cycle route in one day like Ben and I were, and Le Gastronome just down the road in nearby Fontaine-le-Dun was the perfect pit-stop for some traditional, hearty Norman fare before we got on the road again.

Once past Saint-Pierre-le-Viger, we moved onto quiet, well-signposted country roads for about 20km until we reached the town of Saint-Vaast-Dieppedalle, where the route reverted back to the old railway.

Passing through the pretty village of Cany-Barville, we took a brief five-minute detour to the tip of the nearby Lac de Caniel, a scenic lake and leisure centre used for all manner of water sports and family activities like bowling and mini-golf. Definitely a worthwhile stop-off if you’re cycling with little ones, or even if you just fancy a picnic by the lakeside. 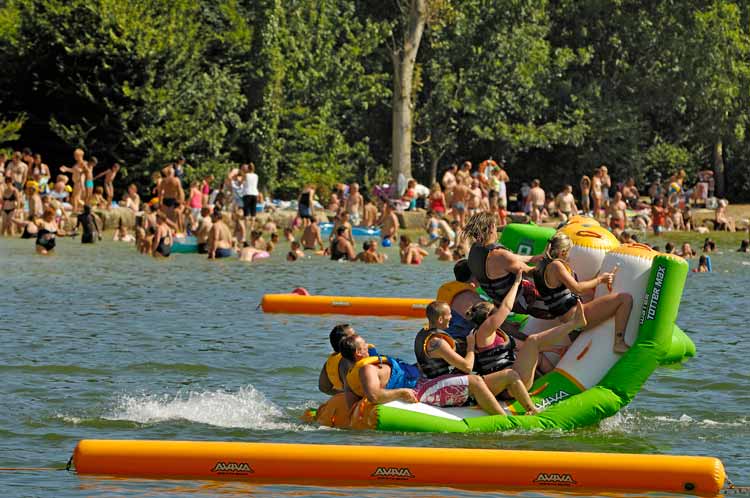 Lac de Caniel is a perfect detour for anyone cycling with little (or big!) kids. Photo: Philippe-Deneufve/Normandy Tourism

Between the Lac de Caniel and our next stop lay a beautiful 15km stretch of flat, picturesque cycle route, dipping in and out of woodland past more quaint old stations. It was just outside a place called Bertheauville that Ben and I were to see the best flax field yet.

Upon leaving a sun dappled copse, we were hit with a burst of sunshine and, as our eyes adjusted, a shimmer of cool blue to our left, extending as far as the eye could see. As a flax plant’s flowering period generally only lasts 15 to 25 days before it is then harvested for fibre production, we counted ourselves truly lucky that we came when we did. 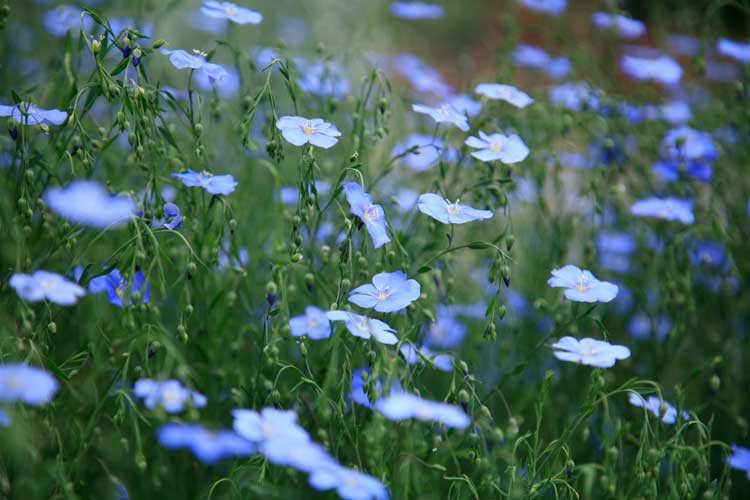 Instagram photos and stories successfully uploaded, we left the flax fields behind and passed Valmont’s old train station, a promising sight since this was our next stop. Valmont marks the site of the Notre-Dame-du-Pre Abbey, which was founded here in 1169. Destroyed like many abbeys were during the Hundred Years’ War, the names sounds familiar, and it is only when I mention it to Ben that I realise why: the abbey features in Eugène Delacroix’s famous painting Ruines de l'abbaye de Valmont, which now lives in the Louvre in Paris. 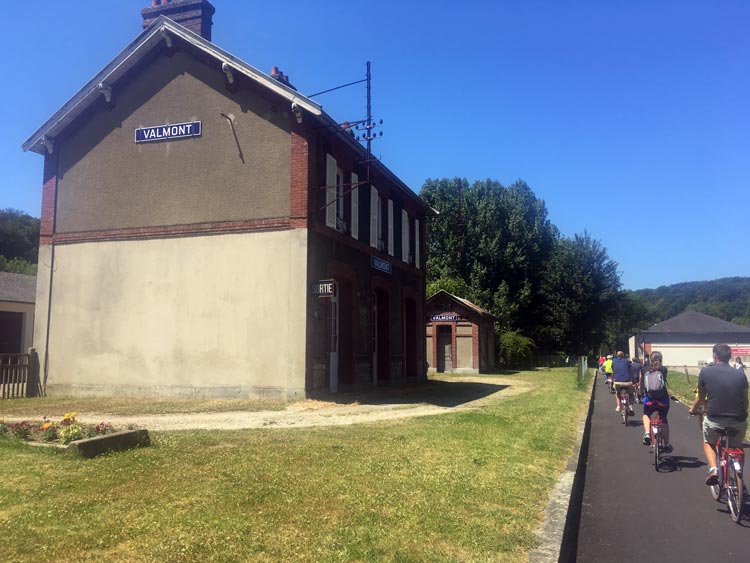 After a walk around the village to see the famous abbey and Le Vivier, the source of the Valmont River which runs from here to Fécamp (our final destination), we headed to the Restaurant de l’Agriculture for a spot of early dinner. A spacious converted barn with a generous terrace for dining al fresco, this place was a real hidden gem, with a varied menu ranging from hearty salads with lashings of bacon and Norman cheese (me), to altogether more refined steaks and foie gras (Ben).

Not much further remained between us and our final destination, Fécamp.

Once outside Valmont, we found ourselves in the Valmont valley, where the final stage of the cycle route more or less followed the river course the whole way. After half an hour of leisurely pedalling, we hit the outskirts of Fécamp, a somewhat industrial awakening from the cycle route’s overall rural bliss. Yet this section, still well signposted, soon improves as we near the mouth of the river and both Fécamp harbour and the Musée des Pêcheries, the town’s former fish-drying warehouse and now a brand new museum, slips into view. 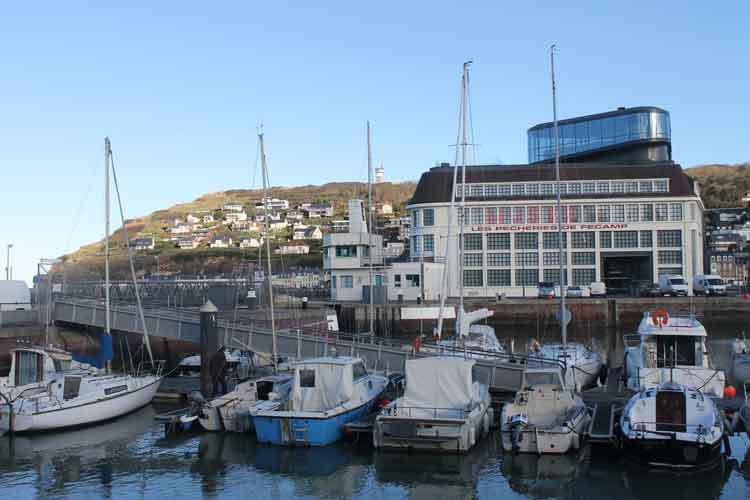 Surrounded by the tallest cliffs in Normandy, Fécamp stands in a dramatic location along the Alabaster Coast and is a town steeped in history. In the Dark Ages, a Benedictine abbey was established here, and in the Middle Ages it was one of the first coastal bases for the dukes of Normandy. Today it continues to take pride in its fishing tradition, as well as a slightly less expected pastime: its production of an exotic liqueur, Bénédictine – which you may have in your local supermarket – at a lavishly ornate palace two minutes from Fécamp harbour. 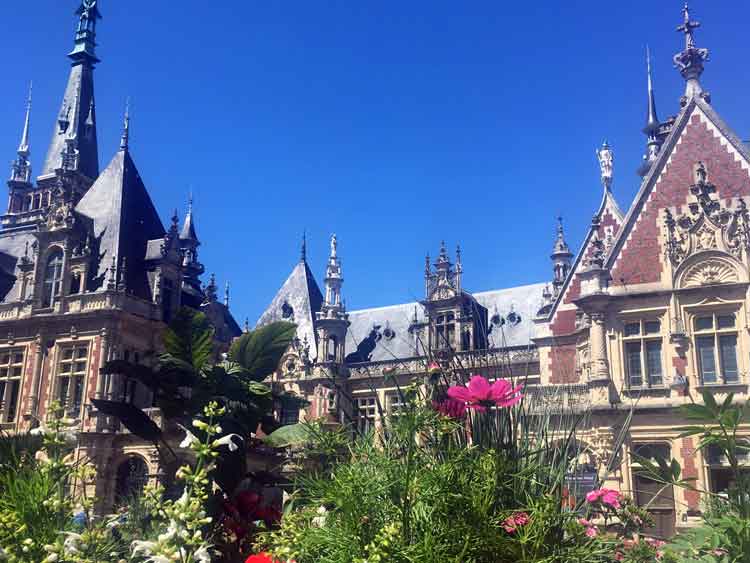 Fécamp’s famous Palais Bénédictine marked the end of our journey. Legend has it that in 1863, local wine trader Alexandre Le Grand discovered by chance the recipe for a secret elixir that had been produced at the Bénédictine abbey in Fécamp until the French Revolution. He managed to reproduce the elixir and had a palace built especially for distilling this liqueur and displaying his art collections. On arriving at the palace just before it closed, we locked our bikes up and headed into the palace for a guided tour followed by a complimentary glass of Bénédictine liqueur. It was the perfect blend of art, architecture and alcohol – what better way to top off a day of cycling?

Flax is also sometimes known as linseed. The word 'flax' can refer to the flower or plant, as well as to the fibres that are harvested from it, which are used to produce linen. The oil from the plant can also be harvested for linseed oil.

This excellent short film (with English subtitles) takes you through the entire production process.

When is the best time to see the flax flower fields?

June is flax flowering season – mid to late June is a good time to cycle the Véloroute du Lin if you want to see the flax flowers in full bloom. However, as with most forms of agriculture, the flax industry has a year-round production cycle that takes in planting, harvesting and production. You can, for example, visit the Terre de Lin year-round, and flax farms, and linen and textile shops can also be visited locally.

Why is Normandy famous for flax?

Northern Normandy has ideal conditions for growing flax, with humid temperatures providing the right conditions for farmers to exploit the region's silt-based soil.

Flax today is relatively rare, accounting for less than one per cent of textiles produced worldwide. However around 80 per cent of the world's flax comes from Europe and at least half this is grown in Normandy.

For tourist information on the Véloroute du Lin, see the Seine-Maritime Tourism website.

Check our map above or browse our Normandy bike hire listings, or ask us for help.

For self-guided and guided ideas, check our listings, or use our bespoke service.

More on cycling in Normandy