To mark the centenary of the Armistice, Becky Allen and Mark Goodson cycled the length of the Somme in search of a more peaceful side to this iconic French river.

See also this itinerary bike route for cycling the Somme

The Somme is synonymous with mud and suffering and the loss of thousands of lives. Fought over during both world wars, its battlefields remain a major tourist attraction.

In June 2018, heading to Calais from the south of France, we spent a night in a tiny cabin in Amiens’ Hortillonnages – the 300 hectares of market gardens on the eastern edge of the city. Driving down the towpath to the “floating gardens” (where each tiny parcel of land is divided from the next by small canals flowing from the Somme) we decided to return to cycle the Somme from source to sea.

In August we did. We spent our first night in Saint-Quentin, in a B&B converted from one of the town’s former textile factories, and next day mounted up not at Fonsomme, where the Somme rises, but in Ham. We parked the car at the town’s little station where we’d return by train from the coast, 165km away, at the end of our ride.

We took the smallest roads we could find, past fields of sugar beet and the St Louis sugar factory, via Offoy, Villecourt, Falvy, St-Christ Briost, Brie and Mesnil-Bruntel before rolling up in Péronne – a major destination on the Remembrance Trail thanks to its museum dedicated to the Battle of the Somme – to take on coffee. Although the route was fairly flat, we’d stopped often to check our maps (IGN Top 100 sheet numbers 104: Reims & Saint Quentin and 103: Amiens & Arras) and were really glad we’d bought them. At Péronne we hoped route finding would get easier. From here, the newly-opened V30 Véloroute de la Vallée de la Somme runs all the way to the sea. How hard could following a river the size of the Somme be? 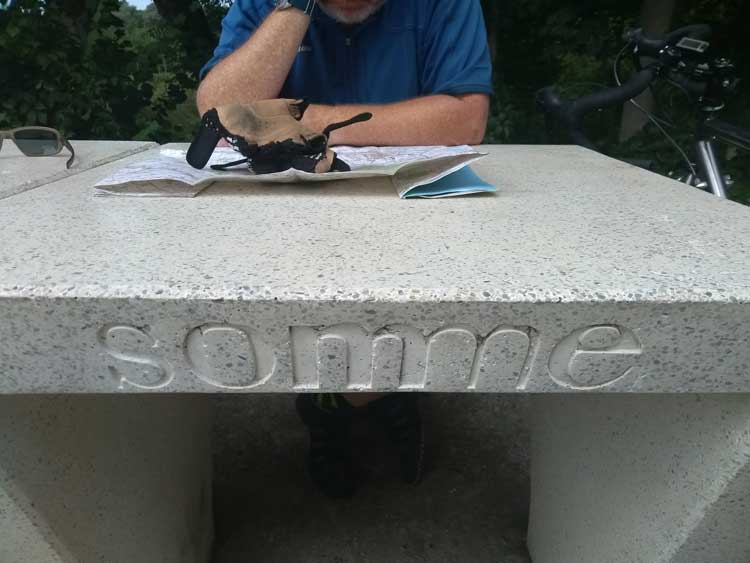 At Péronne’s little Port de Plaisance, despite spotting the first green and brown bullrush sign that brands the Véloroute, we soon lost the river. The Somme, it seems, prefers to keep itself hidden amid its large, lush and watery floodplain. Instead, we cycled out of town along the D1 and spotted, through a gap in the hedge, the tiny British cemetery of Herbécourt. In the middle of a field, arranged around a slim stone cross and cinched by a low stone wall, are the graves of 51 Australian and eight British soldiers. We took a photograph of one of the headstones: Private Robert Bartholomew Fontana. Killed on 1 September 1918, aged 29, he was from the Australian Cyclist Corps. 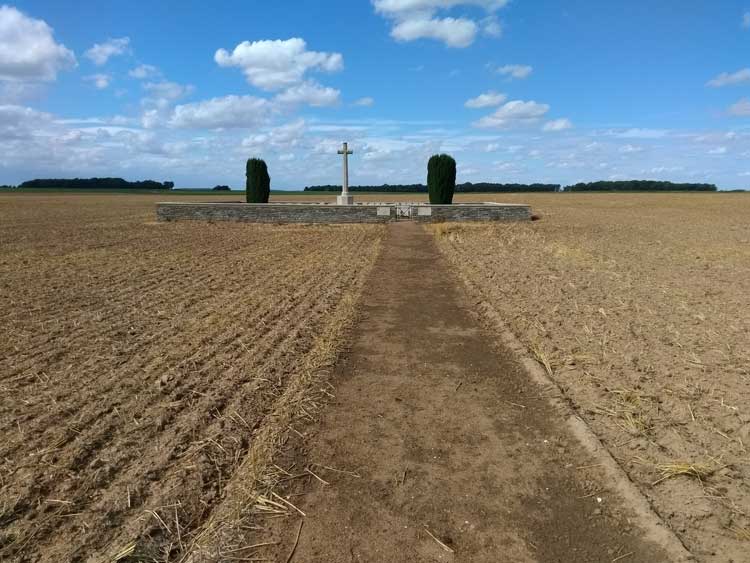 At Frise we were reunited with the V30 and stuck to it like glue. For a brand-new cycle route the signage is generally good and there’s only one section – from Pont-Remy to Abbeville – where the towpath is bumpy. For the vast majority of the 120km between Péronne and the sea, the route is fabulously flat, traffic free and freshly resurfaced.

Between Péronne and Amiens, the Somme snakes through the countryside in a series of sinuous curves and on one of these, at Bray-sur-Somme, we stopped for our next night in an airb&b. Our self-contained chalet was spick and span, and the village supermarket and pizza truck had everything we needed to refuel.

Our second day’s ride began by rejoining the Véloroute at Cappy, one of the stations on the Petit train de la Haute Somme, and ended in Amiens. In between, the path follows either the canal or the river, often so surrounded by lakes and marshland that it’s hard to know which is which. Along this stretch the old milestones have been reinstated, along with bright new concrete picnic tables and benches. 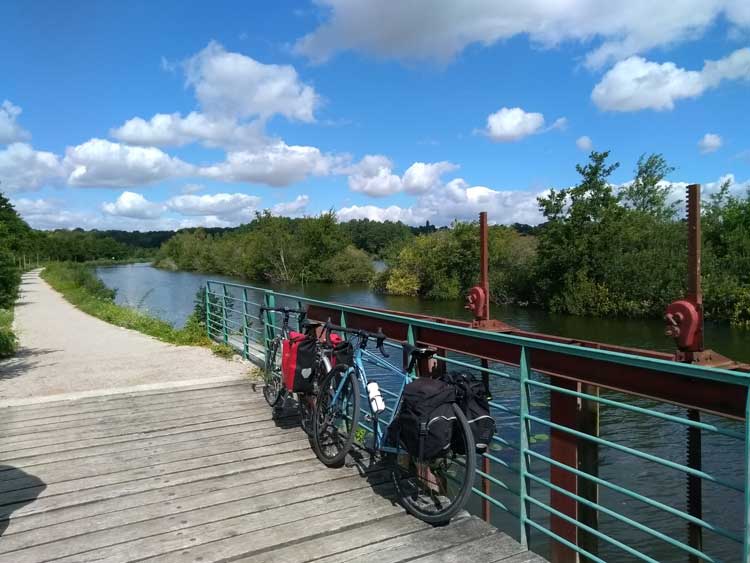 At our next picnic stop we picked up an email from our Amiens hosts saying that our airb&b had burned down overnight. We booked into the local Ibis, had a coffee by the cathedral and spotted the charred remains of what should have been our room down by the quayside restaurants.

Cycling from Amiens to Epagne-Epagnette

Day three took us from Amiens to Epagne-Epagnette, a tiny hamlet just shy of Abbeville. The signposting along the cycle route through Amiens is a little less reliable until you’re past the factories and housing estates west of the city, but once the route becomes rural again the signs return in abundance. At Ailly-sur-Somme we stopped for coffee at the station buffet and, a few more miles down the Somme, made a small diversion to the German war cemetery at Bourdon St Martin.

Instead of the first world war graveyard we expected, we found ourselves amid the dead of another war. Boudon is one of 23 German world war two cemeteries in France, and the remains of 22,215 German soldiers killed in the Somme, Nord and Pas de Calais were reburied here in 1967. Compared with the well-trodden battlefields of 1914-18, Bourdon felt strange and sombre and made us think about who we remember, and how.

Our fourth and final leg took us into Abbeville and out along the arrow-straight Canal Maritime d’Abbeville à St-Valéry where canal and river spill into the vast, sandy Baie de Somme. We had lunch in St-Valéry, rode to the fisherman’s chapel high above the village to get a view of the sea, and then popped ourselves and our bikes on the tiny tourist steam train to our B&B in Le Crotoy on the other side of the bay.

Rather than rushing back, we spent two nights at the seaside. Le Crotoy was a favourite haunt of Collette, Jules Verne and Guerlain, and today it’s still full of holidaymakers eating seafood, enjoying boat trips at high tide or guided walks across the Baie when the tide retreats to leave miles of sand. 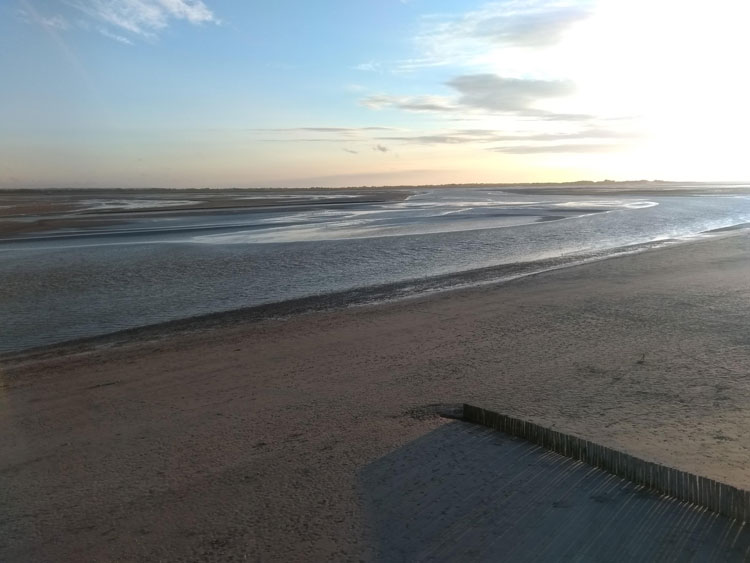 The final miles on the bike took us on the cycle path to Noyelles-sur-Mer to pick up the train back to Ham via Abbeville and Amiens. And although we’d come to discover more about the river’s natural beauty, there’s really no escaping its past. While we were waiting at the station we noticed signs to Noyelles’ Chinese cemetery and pedalled out for a look.

There, just beyond the village, in the cemetery designed by Lutyens, are the graves of 841 Chinese workers who came to France in 1917. They repaired roads and railways and, after the Armistice was signed, cleared the former battlefields of bodies and munitions. By 1919, many of them had died from the Spanish flu.

Becky and Mark cycled 165km from Ham to the Baie de Somme over a leisurely four days. It’s planned to extend the V30 to Ham and Fonsomme along the Canal du Nord and the Canal de Saint-Quentin, and then further east along the Canal de l’Aisne à la Marne to link EuroVelo 3, 4 and the V52 Véloroute from Paris to Strasbourg.

More links for cycling the Somme