This 257km ride showcases the Seine River valley at its finest, meaning you can effectively cycle from Paris to the English Channel at Le Havre.

This one-way route starts in Bray-et-Lû, on the edge of the beautiful Parc naturel régional du Vexin français on the outskirts of Paris and takes you up through Normandy to Le Havre to either the ferry port, or to link with the EuroVelo 4 route. It also links with the Avenue Verte London to Paris bike route as it runs along the Epte Valley.

This is a lovely route that takes in the best of the lovely Seine Valley, but it's largely an unsigned route (download the GPX above). The full route is covered in detail in the Cycling Northern France guidebook.

The Seine Valley is a great way of cycling to Paris if you arrive from the UK at Le Havre ferry port (Brittany Ferries sails there), or, of course, returning to the UK from Paris, perhaps having arrived there on the Avenue Verte route. It's also a handy link if you're biking along the France's north coast on the EuroVelo 4 bike route and want to detour to Paris.

The Seine Valley would also make a great fixed based destination as there is plenty of variety for cyclists, from easy valley-bottom roads to short but often stiff climbs up the valley sides, often flanked by magnificent chalk cliffs.

There is no official signed route, hence I put one together as part of my researches for my Cycling Northern France guidebook.

Here's a suggested itinerary heading out from Paris that's easy to follow in reverse too (Le Havre to Paris). Each day's cycling distance is short to keep it easy and provide plenty of time for cafe lingering and the like. Fitter or more ambitious cyclists will easily combine two day stages into one, giving a five or six day trip.

Generally the route is easy going valley-bottom cycling but with a handful of climbs out of the valley. The only rougher off-road sections are found on the Avenue Verte, west of Maisons-Lafitte, the vast majority of traffic-free sections being tarmac, so the route should be comfortably completable by road bike in good weather.

Day 1: Paris to St-Germain. 37km. 60% traffic-free.
This follows the Avenue Verte from Paris's Notre-Dame along back streets and cycle lanes to pick up the Canal St-Denis. Whilst this canal and the section across the suburbs of Gennevilliers and Colombes are somewhat industrial (though with plenty of cycle lane riding), you are soon on a lovely traffic-free section alongside the Seine, the Promenade Bleu. There is a very quiet riverside road section at Croissy before day's end at St-Germain, a very classy suburb of Paris, dominated by its chateau and magnificent terraced gardens. Note you need to leave the well-signed Avenue Verte to cross the busy Pont Georges Pompidou and follow the road climb into St-Germain.

Other attractions en-route include the pretty and elegant suburb of Rueil-Malmaison which has strong historic links to Napoleon Bonaparte and Empress Josephine. Near the Canal-St-Denis is St Denis itself with its magnificent cathedral (including the royal necropolis) and the town has a wonderful Sunday market.

Day 2: St-Germain to Théméricourt.  77km. 53% traffic-free.
Another short riverside section takes you back across the Seine and through the formal gardens of the horse-racing town of Maisons-Lafitte and onto a forest track. You pick up the river Oise before some careful navigation is required towards Cergy-Le-Haut, though the short detour to the viewpoint over the remarkable Axe Majeur walkway is well worth it.

Its then a combination of minor roads and rural tracks across the Vexin (a Parc Naturel Rgional), now in rural solitude with Paris most definitely behind you. The parc's museum is in Théméricourt's lovely chateau.

Day 3: Théméricourt to Vernon. 40km. 21% traffic-free.
Join the Epte valley traffic-free trail at Bray-et-L then pass Monet's house at Giverny (hugely popular tourist spot; try and arrive as the gates open for the best chance to beating the crowds) and onto the working town of Vernon, occupying a lovely riverside location on the Seine.

Day 4: Vernon to Petit-Andely. 30km. 8% traffic-free.
There's some fast riverside riding out of Vernon before crossing the Seine to visit the attractive centre of Gaillon; a typical provincial French town – bustling, well-kept and friendly. The final leg drops down to the Seine after Aubevoye, for a wonderful finale as Chateau Gaillard comes into view (once the stronghold and frontier post of Richard I of England), towering above the Seine. 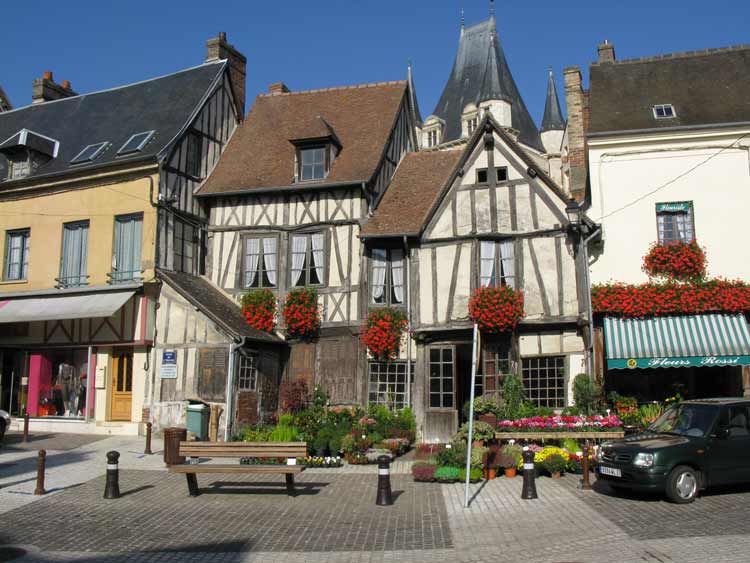 Day 5: Petit-Andely to Pont de l'Arche. 28km. 7% traffic-free.
Here you experience the Seine at its most rural and varied; just out of Petit-Andeley climb up to tiny La Roquette to experience the magnificent panorama nearby. Dropping back down to the Seine cross the remarkable barrage, designed to let huge commercial boats through (right beneath your feet) as well as providing a separate channel for fish. Finish alongside the tranquil river Eure as it runs into the Seine at another attractive provincial town, Pont de l'Arche.

Day 6: Pont de l'Arche to Rouen. 35km. 28% traffic-free.
Shorty after St-Aubin-les-Elbeuf and its rail bridge crossing of the Seine you climb through woods to approach Rouen on a lovely traffic-free path before mixing it with urban traffic on a series of cycle lanes and roads.

Rouen is one of the undoubted highlights of the route. Its medieval centre (actually mainly a modern recreation) is dominated by the cathedral and the place-du-Vieux-March

Note: At the time this route was originally written (early 2016) there were plans for a signed route from St-Aubin-les-Elbeuf directly along the river and into and out of Rouen centre that may already be constructed.

Day 7: Rouen to Duclair. 39km. 18% traffic-free.
A day of generally easy riding, paralleling the Seine and visiting lovely villages such as La Bouille, Ambourville and Duclair. Free roll-on roll-off ferries are a real feature of days seven and eight. 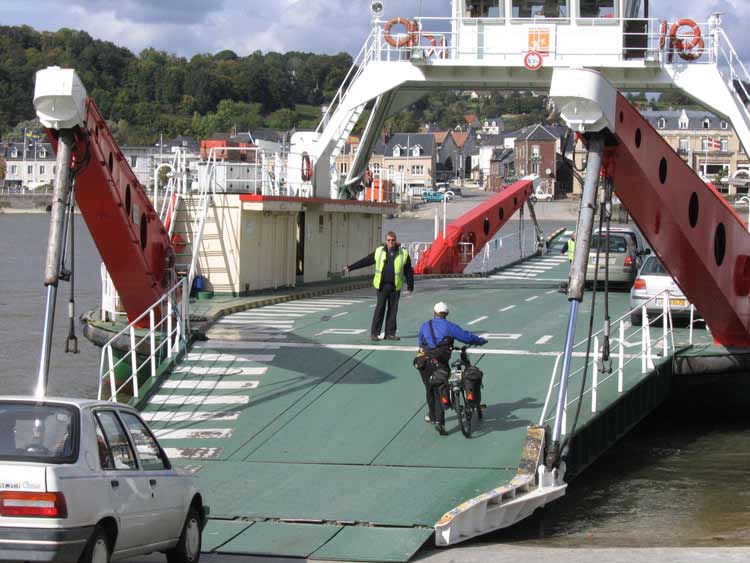 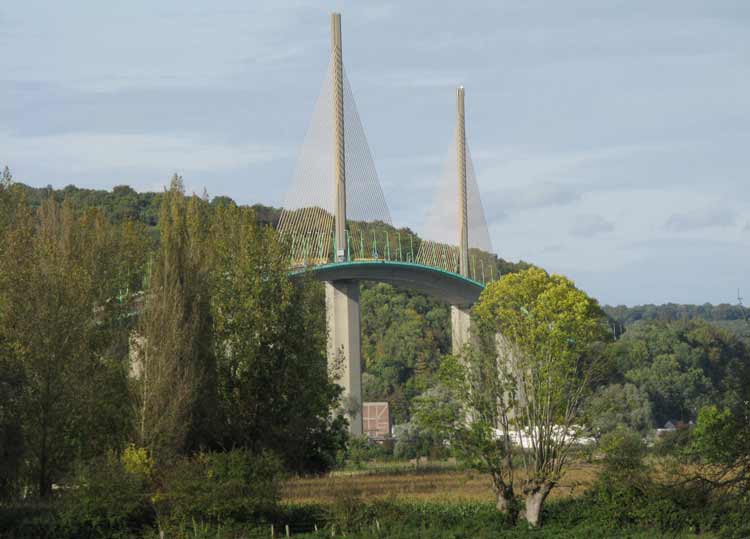 Day 8: Duclair to Caudebec-en-Caux. 27km. 0% traffic-free.
More easy riverside riding with a moderate climb and drop cutting off a loop in the Seine to visit Jumièges Abbey. There is some heavy traffic briefly encountered at Le Trait before the tiniest of rural roads head towards the towering Pont de Brotonne and a wonderfully panoramic entrance above the Seine into Caudebec.

Day 9: Caudebec-en-Caux to Lillebonne. 27km. 36% traffic-free.
Few settlements between your start and end points but a great tarmac traffic-free section beside the Seine and a chance to visit Lillebonne, with its magnigicent Roman amphitheatre remains and central square with more Roman architectural remains.

Day 10: Lillebonne to Honfleur. 38km. 9% traffic-free.
A lovely rural climb and descent out of Lillebonne brings you back to the Seine at another magnificent bridge at Tancarville before quiet, pancake-flat roads lead you to the Pont de Normandie and its hairy looking crossing with staggering views down the river (not at steep as the approach looks in fact). There are cycle lanes over it and you will get the chance to visit the best preserved of the Calvados ports, historic Honfleur. If you don't fancy crossing and recrossing the bridge, its easy enough to head straight for Le Havre. 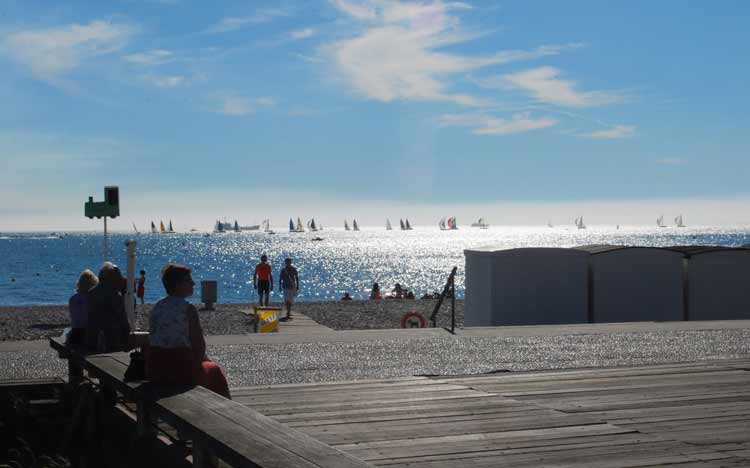 The seafront at Le Havre.

Day 11: Honfleur to Le Havre. 40km. 33% traffic-free.
Back over the Pont de Normandie and through attractive Harfleur, there are two possible approaches to Le Havre. The southern one is more urban and uses mainly roadside cycle lanes next to main roads coming into the town centre itself. The northern one, the Veloroute de la Pointe de Caux, was under construction at its northern end when I rode the route but looks to be a well-signed alternative, though it was a little tricky to find in Harfleur, requiring a visit to the tourist info office. It takes you through greener, pleasanter surroundings and drops down to the beach at the northern end of town, avoiding the centre completely. 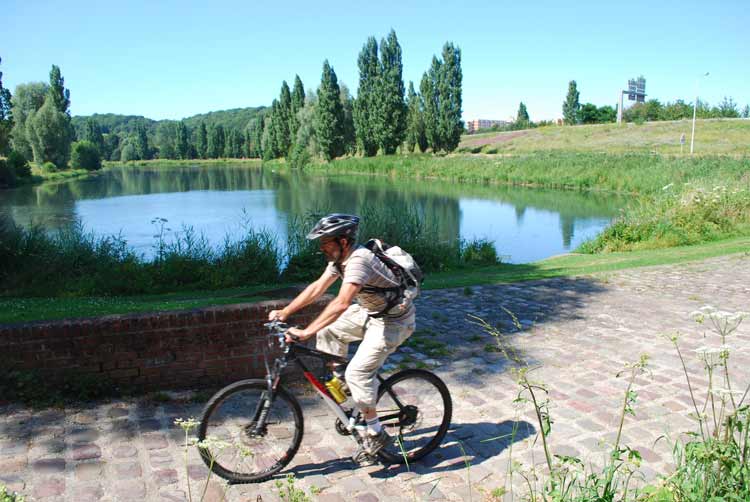 Le Havre itself is a miracle of post WWII reconstruction in concrete and quite a sight; maybe not 'cute' pretty, but certainly very atmospheric and impressive, well provided for with cycle lanes and a brand spanking new tram system, making it very easy to get about without a car. Coastal long-distance EuroVelo 4 (under development) also passes through Le Havre.

All photos by Richard Peace.