Four main pilgrimage walking and cycling routes (and a few lesser-known ones) cross France, all steeped in religion and folklore.

The route, map and GPX files (you can download them here) on this page come courtesy of David who runs the very excellent Saint James French Bike Route website. Rather than replicating all David's information here about the cycling route from Le Puy to St Jean Pied de Port, I will just let you pop across to his website for all the info and guidance you need. His site also includes a day at the end to ride from Saint Jean Pied de Port to the abbey at Roncevaux.

This route from Le Puy goes as far as St Jean Pied de Port, which is a famous (and very beautiful) stopping-off point in the Pyrenees en route to Spain. It covers some 700 kilometres along the route established more than 1200 years ago by pilgrims walking from as far afield as Italy, Switzerland, Germany and Scandinavia.

From St Jean, it is possible to continue over the border to the town of Santiago de Compostela in northern Spain – the final destination for pilgrims walking entire routes. David explains that here. There is also a Cicerone guidebook by John Higginson – see here for the guidebook – that covers cycling the route from St Jean Pied de Port to Compostela.

See also this page for extra info and links to various routes. Note that the official Euro Velo 3 route is also called the "Pilgrims' route" and loosely follows the traditional route from Trondheim in Norway to Santiago de Compostela.

See here for that route and map. It is handy for anyone cycling down from northern ferry ports or from Paris, and passes through both the Loire and Bordeaux. 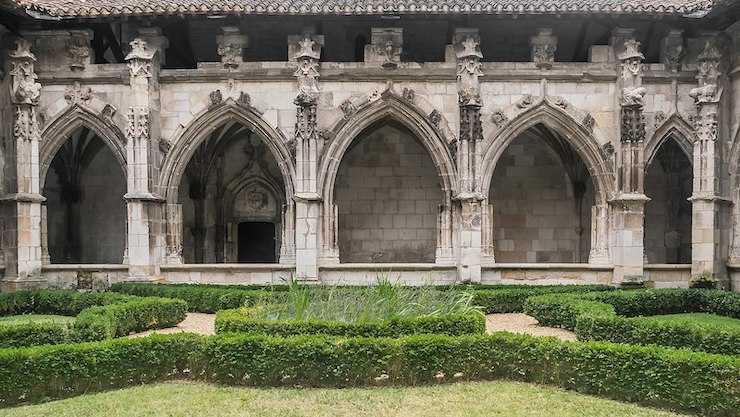 The cloister in the cathedral at Cahors. Photo by Krzysztof Golik from WikiCommons