The French section of the EuroVelo 3 Pilgrims' bike route is called La Scandibérique. It runs for more than 1500km. (Large map - may take a few seconds to load).

Zoom into the map for accommodation and bike hire options

The EuroVelo 3 bike route – the Pilgrims' Route or 'la route des pèlerins' – starts in Trondheim in Norway and goes through to Santiago de Compostela in Spain. It covers a distance of around 5100km following one of the ancient pilgrims' trails.

The French section – called 'La Scandibérique' – covers more than 1500 kilometres. It crosses into France from Belgium and through the Oise valley down to Paris. It then heads down into the Loire Valley (where it crosses with the EuroVelo 6 Loire bike route) before continuing its journey down through the new region of Nouvelle-Aquitaine (the now combined areas of Poitou-Charentes and Aquitaine).

The route intersects with the circular loops of the very excellent Tour de Charente (one of France's most under-rated routes) and runs concurrently with it in some sections. It also crosses paths with the newer Flow Velo route, which runs from the coast to Thiviers. It also crosses the Tour de Gironde and can be linked to the Atlantic Coast via any of these routes just mentioned.

After a must-see stop in Saint-Emilion and Bordeaux along the Roger Lapebie bike path, it weaves its way further south, passing through the relatively undiscovered area of Gascony and down to the Pyrenees.

La Scandibérique is using signposts with the following mark.

Thank you to the route coordinators at CycloTransEurope for the maps. 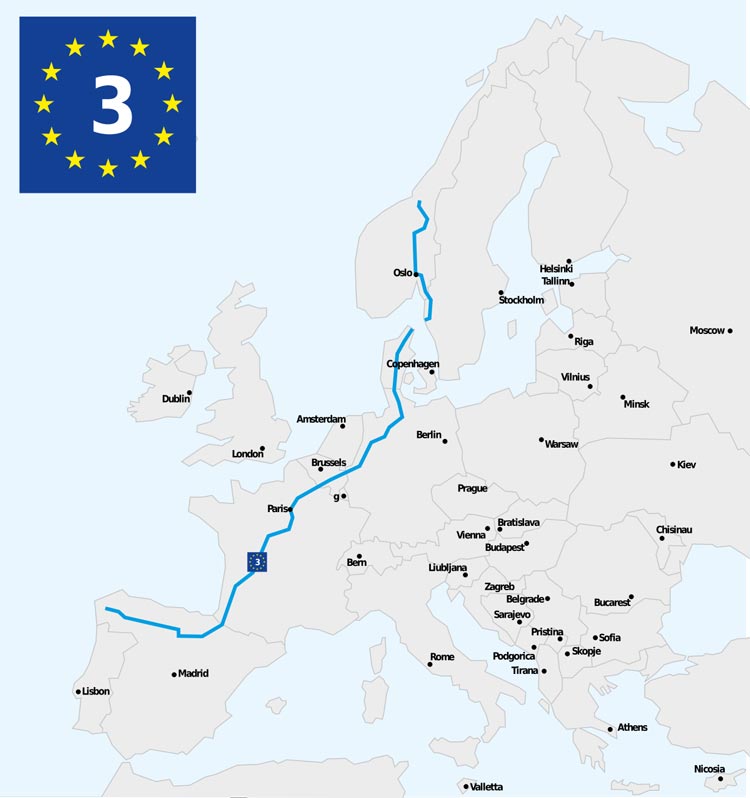