Bike route for cycling from Calais to Paris

While the Avenue Verte via Dieppe is the official bike route for cycling London to Paris, Richard Peace has this alternative Calais to Paris route option.

Firstly, if you are arriving from theh UK, you can read more about the experience of taking a bike on the Dover to Calais ferry here (there is more on your ferry options here).

Once you find the outskirts of Calais, a very short distance from the port, the compact centre is pretty easy to navigate. It's dominated by a large attractive central square (in my case thronged by drinkers and diners on a sunny Sunday afternoon).

Although Calais doesn’t have the cachet of Dieppe or the size and imposing architecture of Le Havre, it was still a pleasant surprise to find such a relaxed and convivial atmosphere in a lovely open square. It was also good to see the town has a prominent and seemingly quite well-used Velib-style bike hire scheme.

You can download the GPX for this route here.

I headed for the southern edge of Calais so I could easily pick up the canalside route the next morning after staying in the local B&B hotel.

As the tourist office was shut until 10am the next day, I just used Openstreetmap to select a likely looking exit along cycle lanes and the canal to Coulogne, where a greenway to Guines begins. This proved an attractive, tarmac, high quality route through marais marshlands ending up at the small town of Guines, which is dominated by medieval history and in particular a clock tower atop the remains of an old motte and bailey castle (cunningly and slightly disappointingly surrounded by buildings so you have to pay to get access and a good view).

From here there is a climb on a fast, straight D road to mount the large ridge at Fiennes before heading off onto twisty and winding roads through some delightful countryside all the way to Herly. 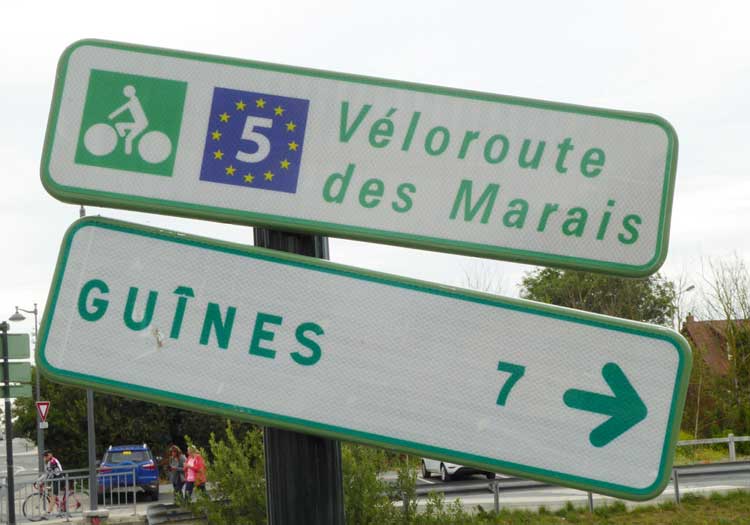 The Coulogne-Guines greenway is also part of the developing Eurovelo 5 route. 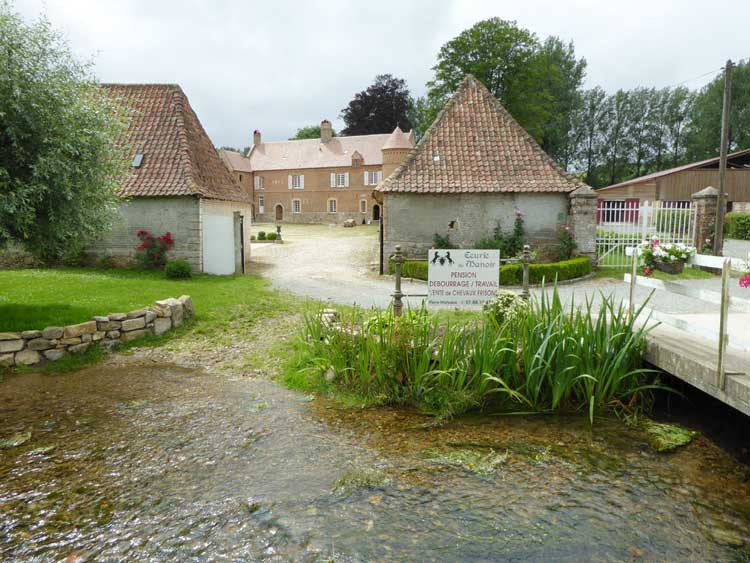 Approaching Herly the route passed through the some lovely villages

I skirted the edge of the Parc Nature Regional des Caps et de Marais d’Opale. It reminded me a little of a combination of the Yorkshire Wolds and North Yorks Moors with its rolling hills and steep wooded banks. Colembert and Desvres are just two of the many attractive settlements en route.

Accommodation: At the bijou village of Herly, I stayed at the excellent La Maison 19.

I was now firmly in the midst of the local beauty spot known as the Seven Valleys, promoted as a canoeing and fishing spot but lovely cycling country too, with its leafy rolling valleys and numerous farmsteads. Hesdin in particular is a lovely little town with a clear stream rolling through the centre and an attractive central square with a typical ‘bellfroi’ lending a Flemish feel to the town. 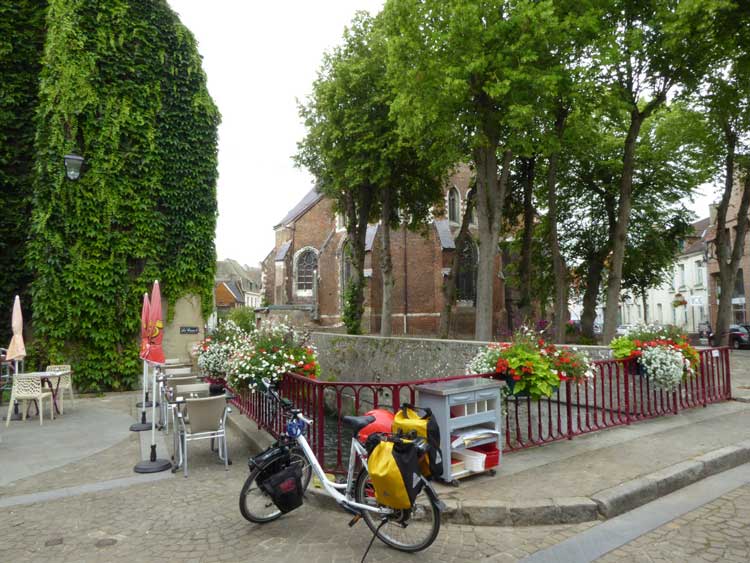 It was then onto similarly attractive Auxi-le-Chateau with its imposing hilltop church. 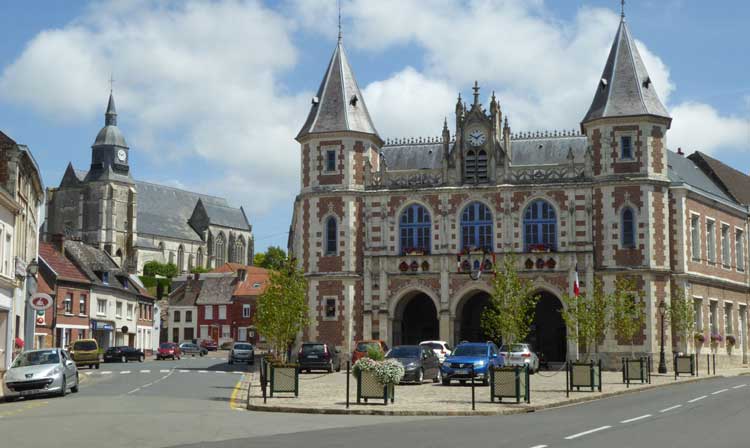 Auxi-Le-Chateau
Leaving the Seven Valleys and starting to approach Amiens, the countryside is dominated by large rolling wheatfields with long ascents and sweeping descents before joining a beautiful and very high quality voie verte along the river Somme, that takes you almost to the centre of Amiens. I also noted this is earmarked to be part of a much bigger veloroute and there is also electric bike hire on offer from the tourist office near Ailly-sur-Somme.

Accommodation: Appart'Hotel Odalys Blamont was one of the highlights of the day. It was a lovely, affordable self-catering apartment only five minutes from the magnificent cathedral and I was allowed to keep the bike in the apartment (though you need to tip it vertically to get it in the lift). It sounds as though there is also secure underground storage and bike hire but my French wasn’t up to getting the full story as to why it was out of action on the day I was there. Suffice to say the hotel is clearly as bike friendly as much of Amiens appears to be, with a number of half-decent cycle lanes. 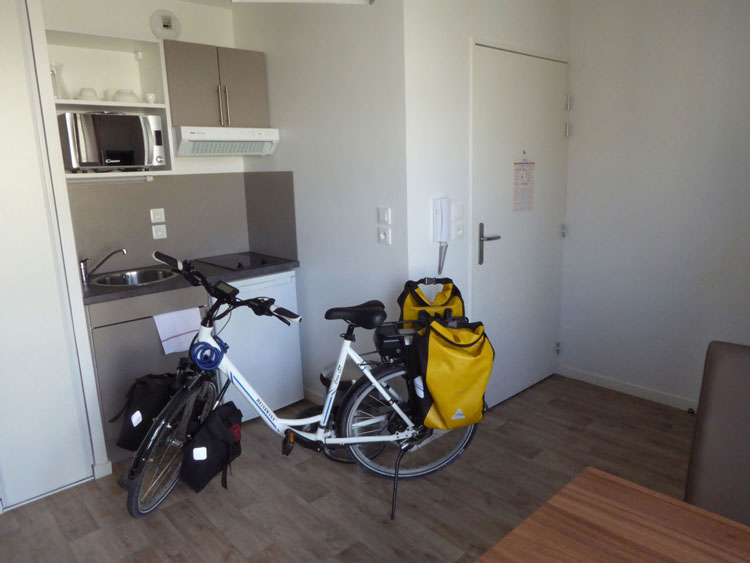 The sweltering summer has suddenly arrived with temperatures topping 30 degrees Celsius, so it was an early start to avoid the heat, passing the front of the impressive mass of Amiens cathedral with not a soul to be seen in front of it. A bit of GPS fiddling got me to the D8 where I pick up signs for the Selle valley and then at Bacouel the Coulée verte, This ‘railpath’ turns out to be classed as a mountain bike route with either a cut grass surface or compacted earth and stone track all the way to its end at Crèvecœur-le-Grand with its impressive chateau-cum-town hall. Conty and Monsures along the Coulée verte are both smart little towns with a modest local tourist trade and low key, relaxed atmospheres. 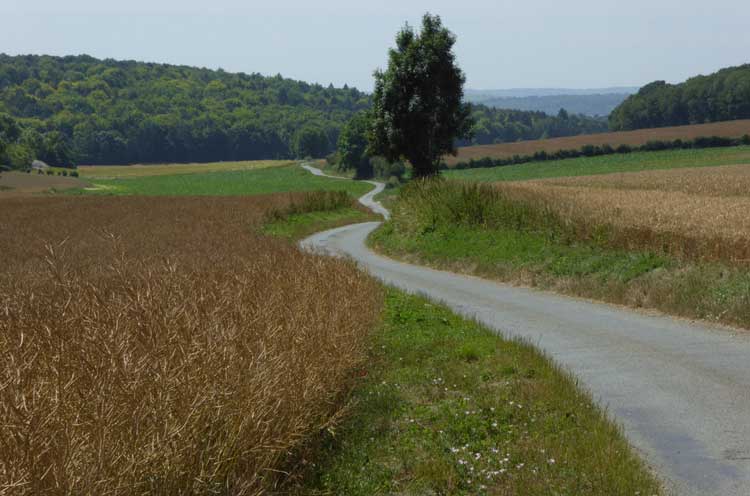 After Crevecouer some fantastic single car width ‘C’ roads lead you through a string of attractive Picardy villages; of these Blicourt is probably the most attractive but all are beautifully kept and beflowered. The final approach to Beauvais is via another marshy ‘marais’ area to the north-west of the town; again Openstreet mapping let me plot a course through here using part of a local mountain bike trail and local parkland before arriving in front of Beauvais’s never-finished but still striking (especially from the inside) cathedral.

Accommodation: The Hotel du Cygne in Beauvais is reasonably priced at €60 for such a great central location and is acceuil velo registered so it has spacious bike storage (though its on the first floor the owner will help with the brief carry up the steps if required). Nearby Place Jean Hachette is a great spot for whiling away the evening in a cafe.

(This day could easily be split into two with an overnight stop at Pontoise).

From Beauvais I headed south east from along the Therain valley then onto some winding and hilly roads, trying to dodge the heavy thunderstorms that had developed, before the D929 took me to Beaumont-sur-Oise, where I joined the Avenue Verte to L’Isle Adam, Pontoise and on to Paris.

The rest of this route is covered in the overview of the Avenue Verte here.

About the author
Richard Peace is founder of Excellent Books, specialists in cycle publishing. He has made several tours of France (including on electric bikes and folders). He is the author of Cycling Southern France, Cycling Northern France, and Electric Bicycles: The Complete Guide. He is a regular contributor to A to B magazine, Bike Europeand writes for Eurobike Show Daily.