Bike routes around the Compiègne forest

Join Mark Cramer as he spends a couple of days cycling around the forests of Compiègne, an area full of green bike routes. 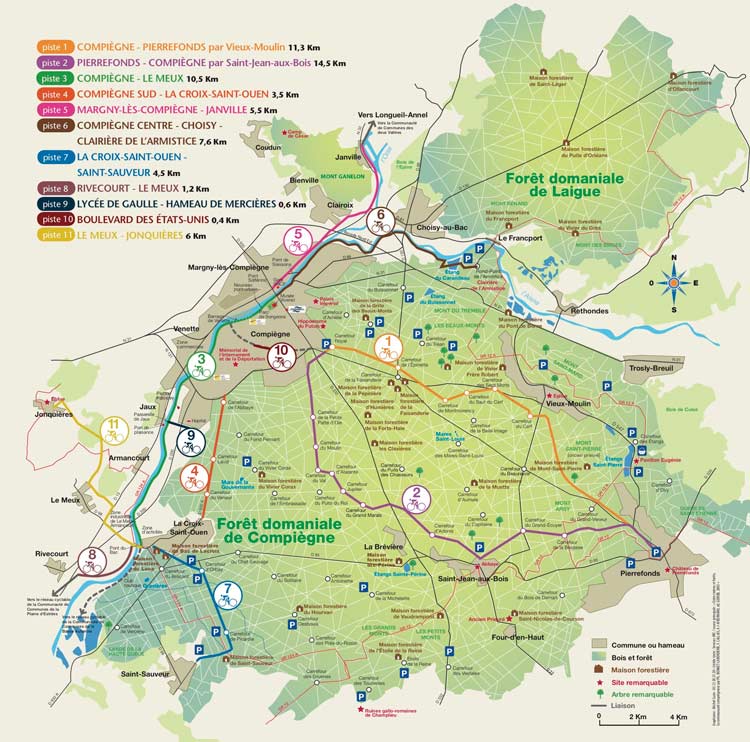 I first cycled to Compiègne from an east Paris suburb, 67km, as part of a charity ride, whose 1000km time requirements deprived me of getting an intimate feel for the region. Compiègne was one of those fleeting encounters that could have become a love affair if given the chance.

So I returned. This time I planned for what I explain as “spokes touring” in my book Old Man on a Green Bike. This total-immersion method uses a strategic core location for multiple departures and returns. Compiègne is ideal for spokes touring, with mainly car-free bike routes of seductive diversity: France’s third largest state-run forest, historical sites, the elegant Oise River, the enormous chateau-fortress Pierrefonds, a beautiful horse racecourse, medieval villages, quaint churches, old stone bridges, and rural roads with gentle hills where “bikes and tractors have the right of way”.

This visit was part of another 1000-kilometre trip, intended to prove that the bicycle is both an efficient and joyous form of transportation. The non-paying sponsor, an environmental organisation, was elated that I was using a 20-year-old bike, supporting their campaign against planned obsolescence (and against my own obsolescence at age 74).

My plan was two days of cycling, doing diverse ARC routes and beyond. 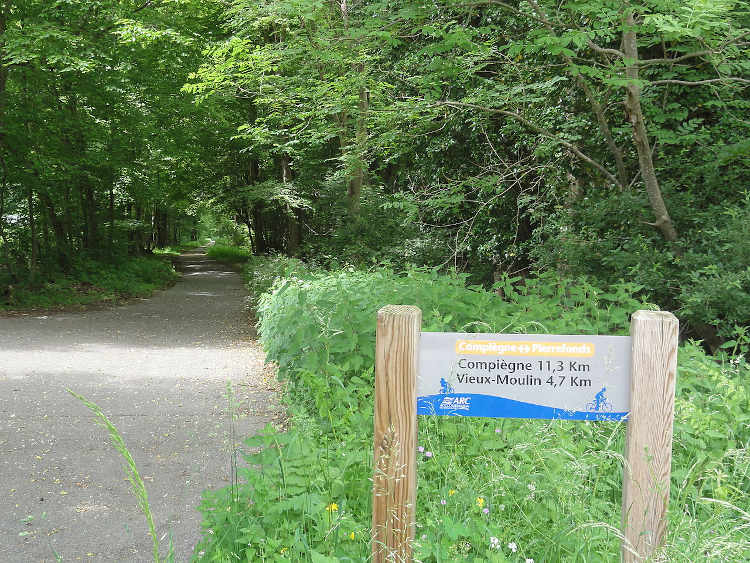 Cycling paths cross through the forest at Compiègne, which sits between the town and Château de Pierrefonds. Photo: Havang(nl) via WikiCommons

What happens when a perfect plan goes wrong?

I had a reservation for an early train from Gare du Nord and one night at the bike-friendly Hotel Flandre, overlooking the Oise and the charming town centre, a perfect “core” for spokes touring.

I descended to our basement storage space, but my start-of-tour exuberance was punctured when I discovered that the front tyre of my bike was flat, the same tyre that I’d fixed a few days earlier.

I had a cross-town ride to catch an early train. Before panic set in, I caught sight of a solution:my wife’s new bike (she was away in California). A new bike: hardly an image supporting the good fight against planned obsolescence, au contraire, but I had no choice. 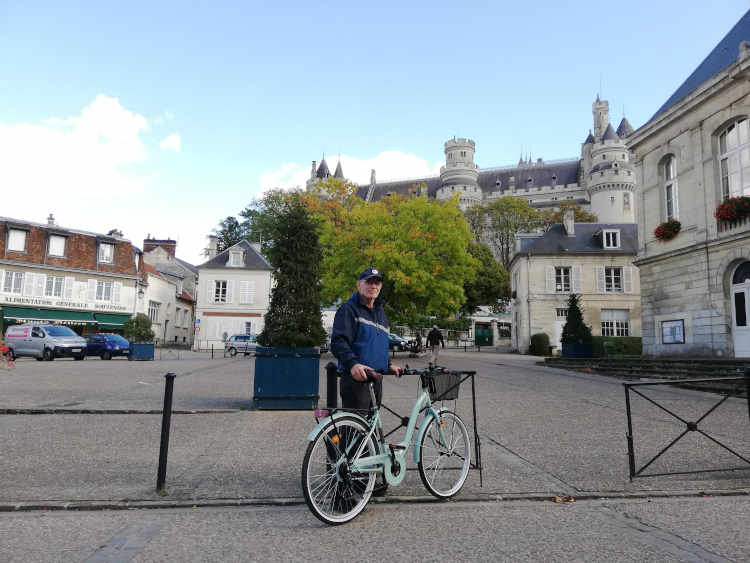 Mark and his wife's new bike.

Following a mellow ride on the bike-friendly TER train from Gare du Nord, I deposited my belongings in a comfortable room at Hotel Flandre. The hotel manager promised she’d have a safe place for my bike at night.

From Piste 6 along the Aisne River, a tributary of the Oise, I took a detour to stop off at the site of the last World War II deportation train, which transported 1250 men to Buchenwald. This splendidly beautiful place had been the scene of the ultimate of criminal tragedies. I understood that I’d made it here not by pedalling but by the grace of luck.

The next stop, l’Etang du Caradeau was idyllic for everyone but the carp who get caught in fish hooks.

My visit to the Clairière de l’Armistice was dampened by the Memorial to the last Deportation. The 1918 Armisitice agreement that ended one war had been followed by the punitive Treaty of Versailles, whose “war guilt” article was used by the Nazis to promote World War II. I saw no mention at the Marshall Foch monument of his ominous warning about the 1919 Treaty of Versailles: “This is not peace. It is an armistice for 20 years.”

Following a visit to the train wagon used for the signing, I decided to take a shortcut rather than cross over to Piste 1. Winging it stupidly, I hit one brief (and avoidable) stretch of a truck-plagued national road, in order to make it for picnic time at Vieux Moulin. Following lunch, I rode into the village, hoping that the Auberge du Daguet (menu from €24 to €95), would serve me an intense cup of coffee.

I was not disappointed. As the world’s slowest coffee drinker, between sips I contemplated the local church, right in front of the restaurant.

Part of my bike pledge was to travel off the grid, no cell phone, no gadgets. I was aided at Pierrefonds by the woman at the tourist office, who took my picture in front of the towering Pierrefonds castle-fortress.

I later hustled back onto the combined Pistes 1 and 2, turning left at the fork, onto Piste 2, headed for Saint-Jean-aux-Bois.

The piste was packed dirt, with pleasurable rises and descents. For avoiding the afternoon sun, this was the cool place to be. (Attention! Watch out for protruding rocks and roots.)

I got lucky at Saint-Jean, happening upon an exhibit of regional artists at La Maison du Village. The hostess took my Fordham University bottle and went to fill it up with local water, while I enjoyed the exhibit. Tiny village, energised art scene.

With only 9km of forest trail remaining to Compiègne, I had time to meditate in the garden of the Porte Fortifié and then pay tribute to the 800-year-old oak tree, named “Chêne de Saint-Jean”, where I drank some of the same local water that had kept this old guy alive for eight centuries. 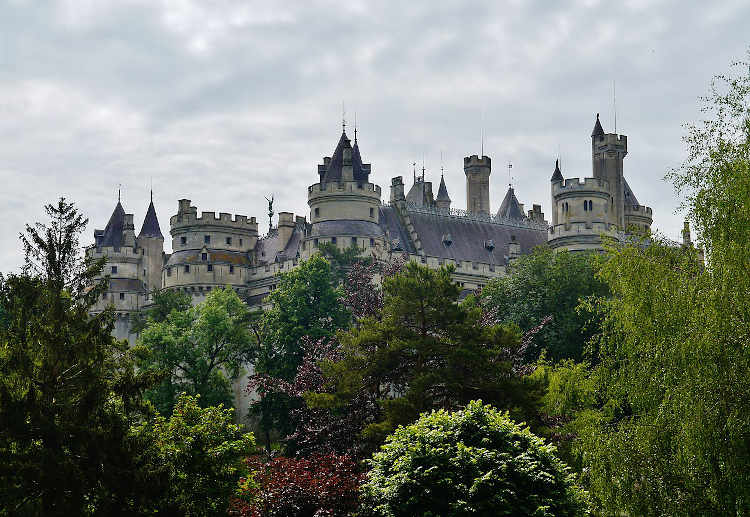 Once emerging from the forest, I happened upon Piste 10, Boulevard des Etats-Unis, which propelled me downhill to the town center and my hotel. I found a nearby supermarket with grainy bread, fresh-cut cheese, veggies and fruit, plus breakfast items for my eat-and-run morning.

I didn’t bother with the TV since I was off the grid. My screen was a window onto the twilight enveloping the river and the city. Before sleeping, I had maps to read, riding mistakes of the day and dreams of what lay ahead.

Day 2: Piste 3, the Compiègne-Le Meux river ride, Piste 11 round trip: farmland, rolling hills, and then hors piste Le Meux-Verberie and back to Compiègne. Then an afternoon outing: Gare SNCF to Janville, Piste 5, round trip.

The river ride requires multi-tasking: enjoy the scenery, yes, but also watch out for sharp tree-root bulges in asphalt. Including village detours along the way, I arrived at Le Meux, crossing the river onto Piste 11, where I found a café-tabac. A local chap enjoying a morning beer wondered how I’d kept my American accent after having lived in the Paris region for nearly 20 years. I vowed to find someone in Jonquières with whom I could unwind my French.

This was my Hemingway road, twisted sensorially through the farmlands. “It is by riding a bicycle that you learn the contours of the country best,” wrote Hemingway. Road signs: “tractors and cyclists had the right of way”. At a fork in the road, I stopped off at a cemetery to fill up with water.

The silence in the country air was just as profound as the silence of the buried. I sat on a ledge and wrote a haiku poem before finishing the climb to Jonquières.

Jonquières seemed deserted. A single car proved that the village was inhabited. On my descent I found a local, the driver of a postal truck, who had stopped at the edge of the road to feed two donkeys.

“Great to see the post office in remote places. Do you get a lot of mail up here?”

“Mainly packages,” she said, laughing: “Soon we will all be employees of Amazon.”

Back down through Le Meux, brief in and out of Piste 8 to get a feel, and back over the bridge to the river route. I could have chosen Piste 7 to Saint-Sauveur, but a right turn along the river would take me to Verberie (16 km round trip). I had a packed picnic lunch but was missing desert. From a previous trip I remembered a great pastry shop on the main street of Verberie.

This was my newest definition of freedom: having the right to cycle 16 kilometres for a croissant aux amandes. Hugging the river, I enjoyed the glistening wetlands, from a type of wooded causeway, the Oise to my right and ponds to my left. 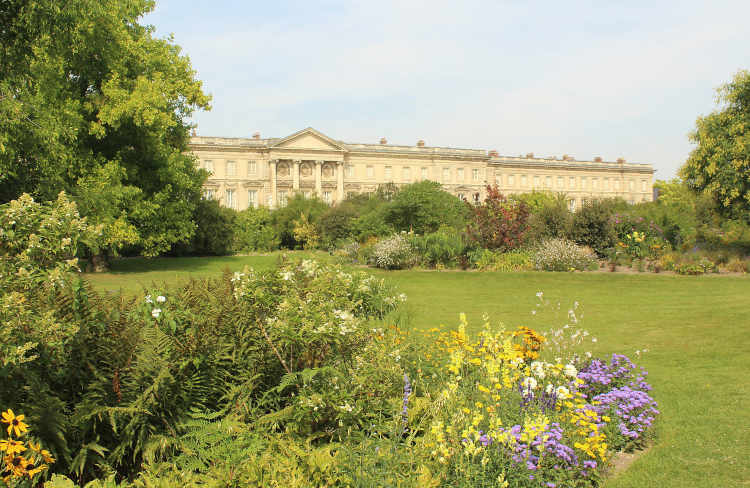 The great thing about bike touring is that little problems totally replace the big ones. Back into the wetlands, the “problem” was finding a place in the shade for my picnic. Eventually I found an old log in the woods.

Once back to the hotel for a delayed checkout, the manager kept my backpack behind her desk while I went out for a final spoke of the tour, this time from the Gare SNCF to Janville. The protected bike lane straddled the road, a peri-urban ride set between the river the wooded Mont Ganelon, 130m above.

The destination was Port de Janville island. Even though the bike route steers clear of the town, Janville’s extended gritty mainstreet is worth a visit. Had it been meal time, I’d have stopped at the Portuguese restaurant.

On the road back, I stopped off at a brightly-painted café called Route 66, at Clairoix, just beneath Mont Ganelon. I soon realised that the nostalgia for the motorised 1950s (all it the Harley Davidson – Ford Mustang Diner) was not my sect. It was colourful reminder of Jack Kerouac’s On the Road. If Kerouac had travelled by bike, I’d have discovered bike touring 20 years earlier.

In the end, the motor vehicle that brings back a most pleasant memory of this bike tour was the yellow postal truck driven by the animal-loving woman on the quiet road to Jonquières.

If the research is true, that one hour of cycling equals one hour more of life expectancy, then my Compiègne tour added 20 hours to my life.

About the author: Mark Cramer is the author of Old Man on a Green Bike: Chronicles of a Self-Serving Environmentalist (UK, US, Fr), a humorous and insightful exploration of bicycle touring and commuting.

Liked this? Then search here for more bike route ideas