Public bike rental was pioneered in La Rochelle in the 1970s. Now, public bike share schemes appear in towns and cities the world over. Here's where to find them in France. 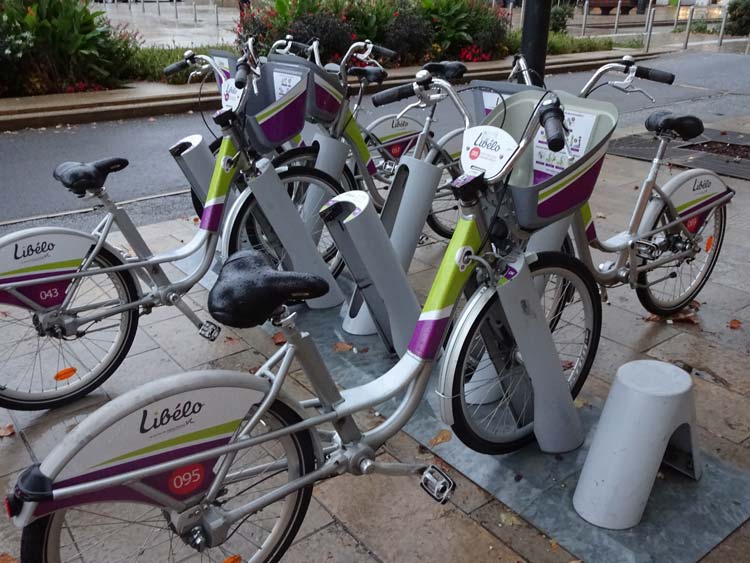 They’ve become a common feature of cities all over the world, but France is where public bike rental all started.

The year was 1974 and Michel Crepeau, mayor of La Rochelle in Poitou-Charentes, introduced a concept that allowed people to borrow distinctive yellow bikes from the waterfront. It was a simple idea: borrow a bike free-of-charge and bring it back when you're done.

The public bike rental concept caught on, and was soon adopted by other cites around the world. These days, public bike hire schemes are big business, with high-tech systems now in operation the world over. Most utilise electronic docking stations with touch screens to provide easy access to bikes; credit cards and PIN numbers are used to release the bikes and track usage. The schemes are often paid for or subsidised by businesses, either via advertising deals or direct sponsorship.

The success of Lyon’s Velo’v bike rental – launched in 2005 – was a watershed moment in France as it was the first big-city scheme to capture the imagination of locals. According to Paul DeMaio of The Bike-sharing Blog, before Lyon introduced its Velo’v scheme, only 1.5% of trips were made in the city by bike; after the scheme was launched (in unison with improved bike infrastruture), bike traffic jumped around 500% with one-quarter of the increase directly credited to bike sharing. By June 2008, Velo’v bikes were covering around 1.5 million kilometres a month, with 36 million kilometres covered since the scheme launched.

It didn't take long for the launch of the Paris bike share – in 2007 – and other larger cities to follow suit with public bike rental schemes of their own.

Bike Radar has more on the development of bike hire schemes in the UK, France and elsewhere.

Here's a summary of the public bike hire schemes across France. If you know of one we’ve missed out, drop us a line and we’ll add it in.

ANGERS
VéloCité
Overview: Bike share scheme for local residents. Bikes can be borrowed after signing a rental agreement (proof of residence required). Bikes can be used for one week to four months, with the agreement renewed twice.

AVIGNON
Vélopop'
Overview: Launched in conjunction with French company Smoove in 2009, the system has 200 bikes available from 17 bike stations. Uers can register at any station with a credit card (registration is also possible by calling 0810 456 456). First half-hour is free, €1 thereafter. A one-day (€1) or one-week (€3) subscription is required. Annual membership (€15) comes with a reduced half-hourly rate of €0.50.
A combination subscription is also available that allows users to combine bike use with other forms of public transport such as the local bus system.

BESANCON
Vélocité
Overview: First half hour free; €1 per hour thereafter, wih a maximum charge of €4 a day. Annual membership is also available for €18. There is a downloadable 'Besançon by bicycle' leaflet in English.

BORDEAUX
VCub
Overview: More than 1,545 bikes at 139 stations across the city and its suburbs.

CALAIS
Vel'in
Overview: First half hour free; €1 next half hour, €2 for every hour thereafter.

CLERMONT-FERRAND
C.vélo
Overview: Various tariffs available, including long-term rental of up to 1 year.

LORIENT
CTRL
Overview: Bike share scheme geared mainly towards locals. Bikes are loaned to students and adults on a medium- and long-term basis.

LYON
Vélo'v
Overview: Lyon’s public bike hire system was launched in June 2005 and quickly became a benchmark for other systems. There are now 340 stations across Lyon and Villeurbanne, hiring out some 4,000 bikes.

MONTAUBAN
Monbee Cycle
Overview: Bikes from €2 for half a day or €3 or a day. Electric bikes available for longer-term use (one month or more)

MONTPELLIER
Vélomagg'
Overview: The founding project for Smoove, the French company that specialises in designing products to assist bicycle sharing, was launched in 2007. The city has around 550 bikes at 60-odd pick-up points. A further 600 bikes are available for long-term hire. Subscriptions are available from one day to a year. The website also has a real-time tracking of how many bikes are available at each station.

PARIS
Vélib’ (in French, though the site also offers a downloadable brochure in English and Spanish)
Overview: Around 20,000 bikes at stations roughly 300m apart. The system is funded by JCDecaux, which in return for funding the scheme, receives blanket use of the city’s advertising billboards. This advertising-based system of sponsorship was first used in Rennes. First half-hour free; next half-hour 1€, second additional half-hour €2 and €4 per additional half hour thereafter. Users need to buy a one-day ticket (€1), weekly pass (€5) or annual subscription (€29). Credit card is needed. Machines all have instructions available in several languages, including English.

PERPGINAN
BIP
Overview: Annual or daily membership; half-hourly and hourly tarifs vary depending on your membership. There are 15 stations with 150 bikes available.

ROUEN
Cy'clic
Overview: First half hour free, second half hour €1, then €2 per half hour, rising to €4. Daily, weekly tickets available, as well as 6- and 12-month plans.

SAINT-ÉTIENNE
Vélivert' (French only)
Overview: Launched in conjunction with Smoove in 2010, it has 700 bikes (400 of these are for long-term use) available from 30 docking stations. Passes cost 1€/day, 3€/week, 15€/year; first half-hour is free, €1 for eac half hour thereafter.

STRASBOURG
Vélhop
Overview: From €1 an hour or €5 a day, with longer term rentals possible. Docking stations all over Strasbourg, plus a number of fully staffed boutiques.

VALENCE
Libélo (French only)
Overview: Launched in March 2010, it features 160 bikes in 20 stations, with another 200 bikes made available under the system for long-term hire for students and businesses.

Do you know of a public bike sharing scheme not on our list? Then please email lyn@freewheelingfrance.com, leave a note below and we'll add it in.

Other bike hire across France